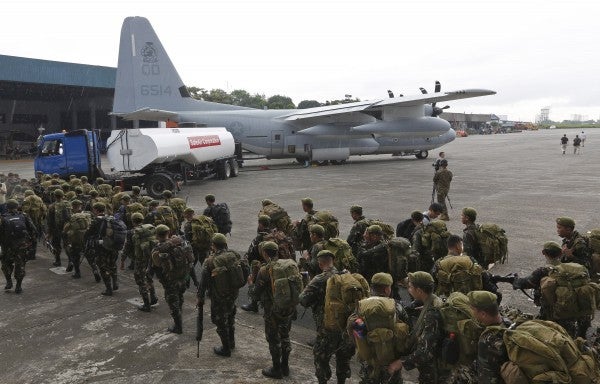 Philippine soldiers walk near a military C-130 plane as they prepare to go to Tacloban city, at the Villamor Airbase, in Manila, Philippines on Tuesday, Nov. 12, 2013. Four days after Typhoon Haiyan struck the eastern Philippines, only a trickle of assistance has made it to affected communities. Authorities said at least 9.7 million people in 41 provinces were affected by the devastating typhoon. AP/Vincent Yu

MANILA, Philippines — The United Nations flashed an appeal Tuesday for the international community to raise $301 million or nearly P13 billion in emergency funding to help Filipinos cope with the aftermath of Supertyphoon “Yolanda.”

Luiza Carvalho, UN resident and humanitarian representative in the Philippines, made the announcement in launching the UN action plan for response in Eastern Visayas at the Department of Foreign Affairs Tuesday afternoon.

She said the amount was necessary “to mount massive humanitarian response required” in devastated areas in the form of emergency food assistance, shelter and health services.

Some 33 countries and international organizations, including the UN, have donated P2.37 billion so far.