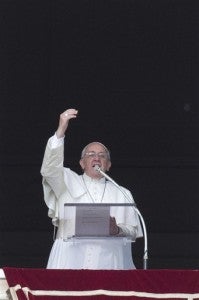 “Following the Haiyan Typhoon… the Holy Father has decided to send a first contribution of 150,000 dollars to help the population,” the Vatican said in a statement.

The aid “will be distributed through the local Church in the areas worst hit by the tragedy” and will be “used to support aid operations for displaced people,” it added.

The donation is intended as “a concrete expression of the pontiff’s spiritual closeness and paternal support for the people and territories devastated by the floods,” it said.

“I ask all of you to join me in prayer for the victims of Typhoon Haiyan / Yolanda especially those in the beloved islands of the Philippines,” he tweeted on Saturday.