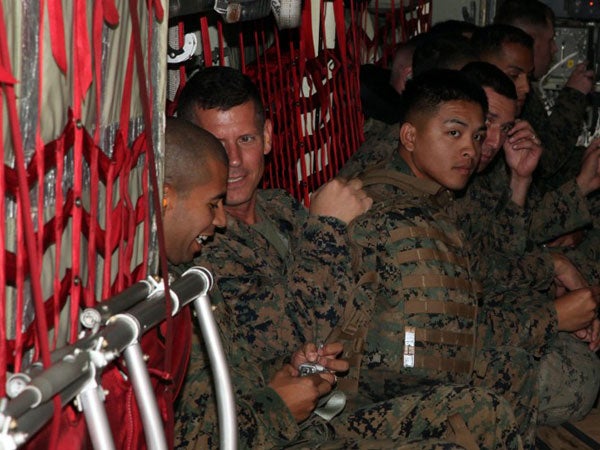 In this photo released by the US Marine Corps, Marines are ready to deploy aboard a KC-130J Hercules aircraft on Monday, Nov. 11, 2013, at Marine Corps Air Station Futenma, Okinawa, Japan. Approximately 300 Marines and sailors assigned to the forward command element/humanitarian assistance survey team, led by Brig. Gen. Paul Kennedy, the deputy commander of III Marine Expeditionary Force and the commanding general of the 3rd Marine Expeditionary Brigade, are deploying to the Philippines from Okinawa following Supertyphoon “Yolanda,” or “Haiyan,” to provide an initial assessment on the support required. AFP

MANILA, Philippines—The United States, European Union, Australia and the United Nations mobilized emergency aid to the Philippines as the scale of the devastation unleashed by Supertyphoon “Yolanda” (or “Haiyan”) continued to emerge Tuesday.

The Pentagon sent Marines and equipment while Britain was to send a ship and a transporter plane to assist with the relief effort following the typhoon, which may have killed more than 10,000 people in what is feared to be the country’s worst natural disaster.

Even Vietnam, despite coping itself with a mass evacuation program as a weakened Yolanda swung through its territory Monday, provided emergency aid worth $100,000 and said it “stands by the Philippine people in this difficult situation.”

The relief operation was focused on the city of Tacloban on Leyte island, four days after one of the biggest storms in recorded history demolished entire communities across the central Philippines and left countless bodies as well as gnawing desperation in its wake.

Delivering on a promise of quick help from President Barack Obama, about 90 US Marines and sailors based in Japan flew into Tacloban aboard two C-130 Hercules transport aircraft, after receiving a bird’s eye view of the immense scale of destruction across Leyte.

They brought communications and logistical equipment to support the Philippine armed forces in their relief operation.

“We are going to move stuff as they direct, as the Philippine government and the armed forces (ask),” Brig.r Gen. Paul Kennedy, the head of the Okinawa-based 3rd Marine Expedition Brigade, said in Tacloban.

Kennedy’s men were the advance guard of a Marine operation that in total will encompass up to nine C-130s plus four MV-22 Ospreys—tilt-rotor planes that can operate without runways—and two P3 Orion aircraft for search and rescue.

“That is what I do, I provide capabilities that are not resident here,” Kennedy told reporters.

Later Monday, the Marine Corps announced it was sending a further 90 troops tasked with helping a humanitarian assistance survey team on the ground.

Britain’s HMS Daring, a destroyer, will sail to the Philippines “at full speed” from its current deployment in Singapore, and will be joined by a Royal Air Force C-17 transporter plane, Prime Minister David Cameron announced in London on Monday.

The Australian government pledged Aus$10 million (US$9.38 million), with Foreign Minister Julie Bishop describing the unfolding tragedy as “absolutely devastating” and on a “massive scale.”

The sum includes Aus$4 million toward a UN global appeal and Aus$3 million for Australian non-government organizations. The aid will include tarpaulins, sleeping mats, mosquito nets, water containers and health and hygiene kits.

A team of Australian medics will leave on Wednesday via a C-17 military transport plane from Darwin to join disaster experts already on the ground, the government said.

Philippine rescue teams were said to be overwhelmed in their efforts to help those whose homes and livelihoods were destroyed after Yolanda ravaged large swathes of the archipelago Friday.

UN humanitarian chief Valerie Amos was expected in Manila to run a joint relief operation by the United Nations and private groups.

The UN refugee agency UNHCR was also organizing an airlift carrying aid including hygiene kits containing basics such as soap, blankets and underwear.

Though the agency usually focuses on conflict situations, the “exceptional nature” of the Philippine tragedy required “all possible efforts… we will play our part,” Guterres said.

— The European Commission said it would give three million euros ($4 million) toward the relief efforts.

— Germany’s embassy in Manila said an initial shipment of 23 tons of aid was being flown in and German rescue teams were already at work.

— Japan was Monday sending a disaster relief and medical team of 25 people, while Malaysia also readied a relief crew and cash aid was offered by Taiwan and Singapore.

— New Zealand increased its humanitarian relief on Monday, bringing its total to NZ$2.15 million (US$1.78 million), while Canada has promised up to US$5 million to aid organizations.

— Medecins Sans Frontieres (Doctors Without Borders) said it was sending 200 tons of aid including medicine, tents and hygiene kits to arrive mid-week, with the first cargo plane leaving from Dubai on Monday and another from Belgium on Tuesday.