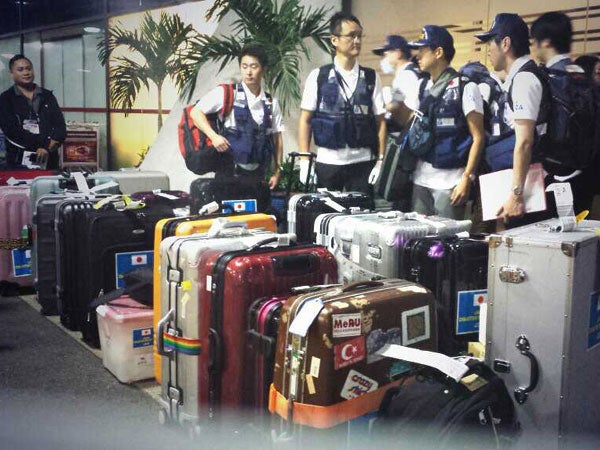 A team of 25 medical workers and disaster relief experts from Japan arrived in Manila on Monday night, keen to help a nation that lent a hand during their time of need.

They are among some 400 health workers from different countries now in the Philippines, according to the Department of Health.

“We will never forget what the Philippines did for us in 2011,” said Kenzo Iwakami of the Japanese International Cooperation Agency (Jica), team leader of the Japanese medical mission.

He was referring to the Philippine contribution to relief efforts following the 9-magnitude earthquake that struck northeastern Japan on March 11, 2011, which triggered a tsunami that killed more than 15,000 people.

“This time, we have to help you. Because two years ago, you helped us. So this time, this is our turn,” said Dr. Joji Tomioka, subleader and medical coordinator for Jica’s medical team for disaster relief.

The Department of Health sent a team of Filipino doctors to help provide emergency medical assistance to tsunami victims, including counseling to those shaken by the disaster, said Minister Akio Isomata of the Japanese Embassy in Manila.

He echoed Iwakami and said in a separate interview: “We will never forget that.”

“We had wanted to come back to Manila with smiles,” Iwakami said, noting how some members of the team had been assigned to the Philippines before.

The team, tentatively scheduled to work on the ground for two weeks, brought medical supplies and equipment enough to establish a medical facility in a calamity area.

“We brought some medications and equipment to make a field hospital,” Tomioka said.

“It’s an unbelievable calamity because as you know, we experienced this similar disaster on March 11, 2011. We’re very sorry about this,” Iwakami told reporters upon arrival at Ninoy Aquino International Airport.

Both have worked in Japanese medical and search and rescue missions in previous natural disasters. Iwakami worked in Phuket, Thailand in the aftermath of the 2004 tsunami while Tomioka has experience in medical missions during calamities in many parts of the world.

The Japanese team is among several medical and search and rescue missions arriving in the Philippines from different parts of the world this week as the international community mounts a massive response to what could be the worst disaster to ever hit the country.

Other countries dispatching humanitarian missions to the Philippines include Belgium, Germany, Hungary, Israel and the United States.

“We are overwhelmed by the assistance and support from our foreign partners. We are coordinating with the World Health Organization for our various medical missions in the affected areas,” Health Secretary Enrique Ona said in a press briefing on Tuesday.

According to him, a 31-man team from Germany’s International Search and Rescue is already in Cebu province and is now ready for deployment to the affected areas.

The team from Germany is composed of three doctors, seven nurses, five paramedics, among others. They also have with them eight tons of medical supplies and equipment.

A 35-man team from Belgium’s Belgian First Aid and Support, which has supplies that can sustain operations for 10 days, has also arrived in Cebu, Ona said.

He, however, noted that aside from logistics and communication problems, bad weather due to Tropical Depression “Zoraida” had been hampering the mobility of the medical teams.

“Unfortunately, the bad weather caused the suspension today of flights from Cebu to Tacloban. But rest assured that once the weather clears, the medical teams will be deployed, hopefully tomorrow, to attend to the needs of the affected residents,” Ona said.

Ona said a 34-member team, including eight doctors and 19 nurses, from Australia was also expected to arrive in the country. The team, which will go directly to Tacloban, will be setting up an outpatient operating room in the area.

“We are also expecting 45 health workers from Norway and some 200 from Israel. They will be arriving in the next few days,” Ona said.

He added that the capacity of the foreign medical mission is “very extensive.”

“They can treat simple diseases like diarrhea to [performing] complicated [surgical] operations. They have the capacity to do that and they will work hand in hand with our own medical teams,” Ona said.

Apart from the foreign medical teams, the health secretary said that medical teams from various hospitals in Manila had been sent to the affected areas in the Visayas.

The Philippine medical teams are composed of doctors with various specializations, nurses, psychologists and psychiatrists and other personnel trained to do psychosocial support, Ona added.