MANILA, Philippines – The European Union (EU) has donated an additional 8 million euros for the recovery of conflict-affected areas in Mindanao. 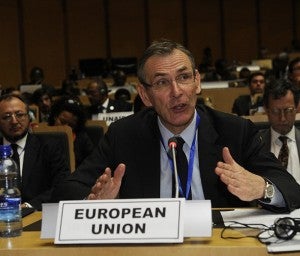 on Monday signed the new agreement with the World Bank, which manages the Mindanao Trust Fund-Reconstruction and Development Program (MTF-RDP).

With the additional funding, EU has become the MTF-RDP largest donor with a total contribution of 13.5 million euros.

Piebalgs, in a press conference, said the donation would help “create an inclusive environment of peace” in the region.

“EU will continue to support the Philippine government and the Mindanao people in the pursuit of inclusive peace and sustainable development in this important region of the country,” he said.

In 2012, the two parties signed the Framework Agreement on the Bangsamoro, paving the way for the establishment of a new autonomous political entity in Mindanao.

BDA chairman Saffrulah Dipatuan said “the additional contribution to the MTF will not go to waste.”

“It will definitely play a very vital [role in the improvement of] social and economic recovery in conflict-affected areas in Mindanao,” he said.

Dipatuan recalled how their agency started from scratch, their personnel without proper training on development work.

Dipatuan said the establishment of the MTF-RDP in 2005 “jumpstarted [their] learning process.”

“By August of this year, through the MTF, 254 soft projects benefitting 300,000 people and 215 villages across 79 municipalities” have been implemented by the BDA, he said.

The BDA chairman said funding from the EU helped develop the agency, which is crucial in the establishment of a new autonomous political entity in Mindanao.

“That is important – the willingness to talk,” he said.

Piebalgs said he does not see any real threat that could derail the peace process in Mindanao.

In an exclusive interview with INQUIRER.net, the EU Commissioner said the ongoing peace talks and the proposed Bangsamoro political entity should not be likened to what happened with the Moro National Liberation Front (MNLF) and the Autonomous Region in Muslim Mindanao (ARMM).

He said that happened in a past, under a “different climate” in a time when there was “more insecurity, more tension.”

“There could be ups and downs,” he admitted, adding that the peace process is not always easy.

In September this year, a faction of the MNLF led by founding chairman Nur Misuari clashed with government forces in Zamboanga City, killing hundreds of residents and displacing thousands. It is believed that Misuari’s group was dismayed with their exclusion from the ongoing peace talks. The group also criticized the FAB for supposedly watering down the gains of their own peace accord with the government, which created the ARMM.

Much of the EU’s assistance to the Philippines goes to Mindanao.

Piebalgs said that although they send most of their aid to Africa, they are now funneling more funds to Asia, EU’s neighbor and important trade partner. From 2007 to 2013, Asia has received more than 5 billion euros from the EU.

In the last 20 years, EU has contributed 600 million euros worth of grants to combat poverty in the Philippines. Piebalgs said they have earmarked an additional 300 million euros for the next several years.