In Asia, Trump gets second-highest approval rating in PH 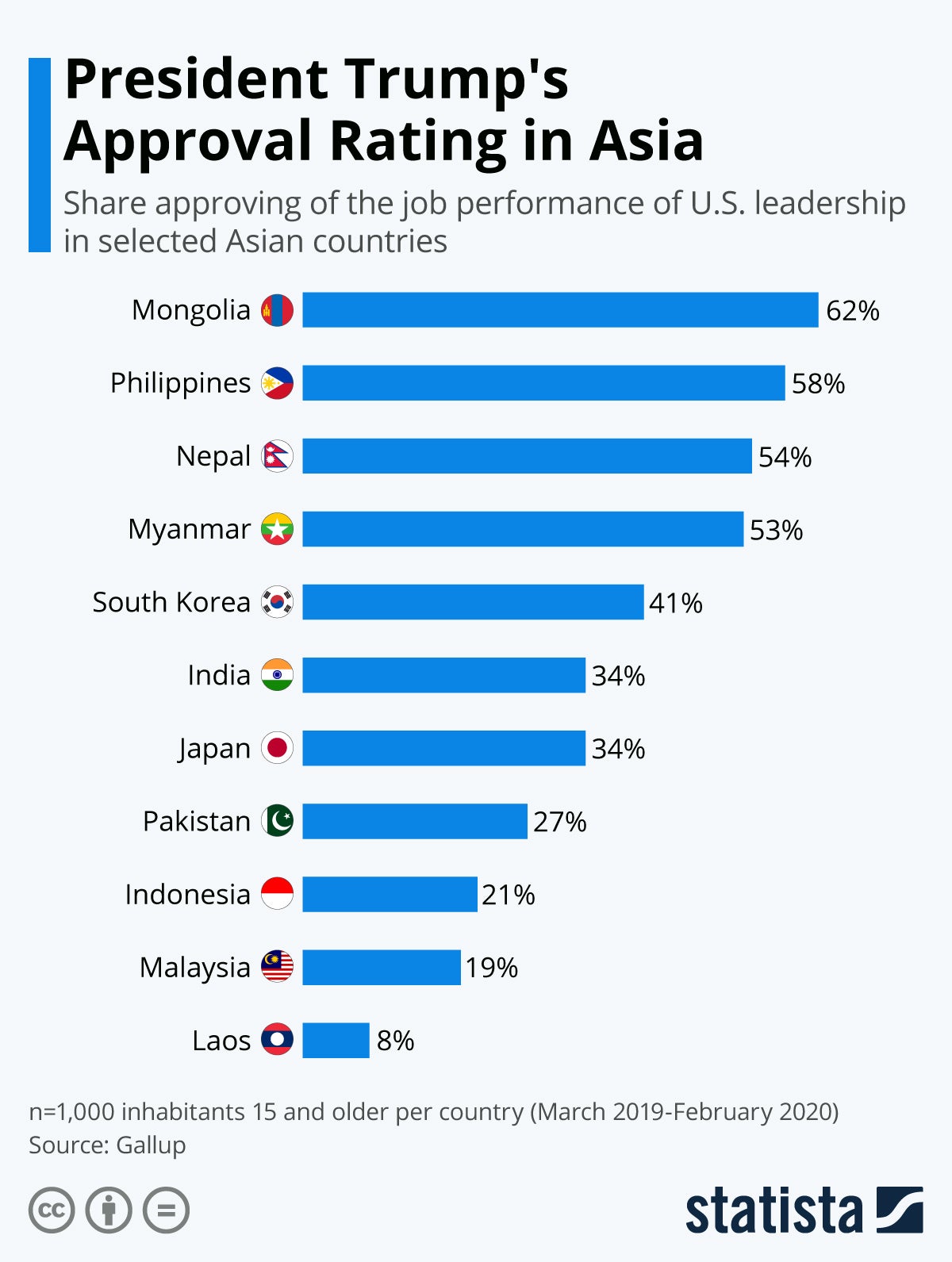 MANILA, Philippines — The approval rating of the United States (US) President Donald Trump may vary among Asian countries, but it appears that he gets the second-highest scores in the Philippines.

In a report from the German market and consumer data company Statista, Trump got a 58 percent approval rating in the Philippines, only behind Mongolia’s 62 percent rating.

According to the survey results published Monday, the disparity between the highest mark for Trump from Mongolia and the lowest mark — Laos, with a meager eight percent approval rating — is quite huge.

“According to a yearly poll by Gallup, approval of U.S. President Trump is varying widely across Asia, with Mongolia and the Philippines exhibiting the highest level of support. The poll asked approximately 1,000 persons over the age of 15 per country if they approved or disapproved of U.S. leadership,” Statista data journalist Katharina Buchholz said.

“Other countries with a majority of people approving of the U.S. president were Nepal and Myanmar. The least support – in the single digits – came out of Laos,” she added.

Buchholz also noted that overall, the world disproved Trump’s policies and governance — with median approval ratings of 33 percent compared to the disapproval of 42 percent.

“Overall, the world disapproved of President Trump: His administration’s global approval rating was at a median of 33 percent, compared with a disapproval rating of 42 percent,” she explained.

“Median approval was lowest in Europe at 24 percent, followed by Asia at 32 percent. Approval grew in the Americas to 34 percent this year and was highest in Africa at a median 52 percent,” she noted.

After Mongolia and the Philippines, Nepal comes third with 54 percent; the complete list of countries is as follows:

Observers in the Philippines have varying views of the Philippines-US relations, while Trump is the superpower’s leader.  Some said that the ties improved, especially since President Rodrigo Duterte butted heads with former president Barack Obama after the latter criticized the war against illegal drugs.

READ: Why is Duterte so friendly with Trump? They both hate Obama

During the Asean gala dinner in 2017, Duterte notably sang upon Trump’s request, who was present during the ceremonies.  However, some believe that relations took a dive after Duterte pushed for the Visiting Forces Agreement’s abrogation between the two countries.

Activists, on the other hand, said that there had been signs of the country veering towards the US — from the suspension of the VFA termination to the release of US Marine Lance Corporal Joseph Scott Pemberton, who was found guilty of killing a Filipina transgender Jennifer Laude in 2014. [ac]