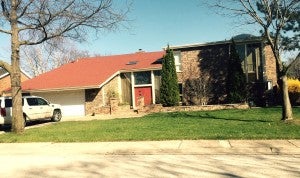 The 5000-sq.ft. “McMansion” of Richard and Maribel Tinimbang in the Lincolnwood Towers, the toniest portion of the upscale suburb north of Chicago. PINOY

Husband and wife, Richard and Maribel Tinimbang, who were to be arraigned before a Federal Court in Chicago April 15 on charges of defrauding the Medicare and keeping an indentured servant, apparently lived the high life.

Richard is the son of Josephine Tinimbang, who is awaiting trial for various charges in connection with an indictment filed last June against her and ten other persons for an alleged scam to defraud Medicare up to $45 million in fraudulent billings and kickback schemes from 2008 to 2014, and money laundering connected with her three health care companies that did business in this upscale suburb right next to Northside of Chicago.

Just like the February 16 conviction of mother and son, Dr. Dalisay Sulit, 77, and her son Reginald, 47, on complaints of looting $1.7 million from the pension funds of their employees at their Alliance Home Health Care in Palos Hills, Illinois, the Tinimbang story hit the pages of major mainline dailies including the Chicago Tribune and Chicago Sun-Times.

The companies allegedly paid bribes and kickbacks to obtain Medicare beneficiaries. In most cases, the Tinimbangs and their fellow indictees allegedly ignored doctors who refused to certify beneficiaries as being in need of home health care.

Further, they allegedly falsified medical records to make patients appear sicker in order to warrant expensive therapy service. The couple and Richard’s mother, allegedly used proceeds from the fraud to make numerous personal purchases, including shares of stock, vehicles, real estate and jewelry, while claiming these as business expenses. 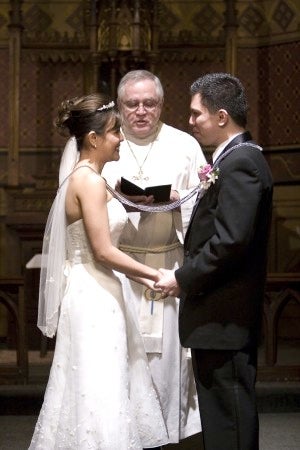 The first Chicago area wedding of Richard and Maribel Tinimbang on Dec. 31, 2006 was followed by a lavish wedding in Manila, Dec. 16, 2009. EVERYSTOCK PHOTO GRAB

Two nurses who worked for the Tinimbangs previously were reported to have pleaded guilty to their roles in the Medicare fraud scheme, as did a marketer, Sherwin Cubello, who admitted he received $300,000 in bribes and kickbacks from the Tinimbangs for patient referrals.

An excerpt from the April 11 report of the Chicago Tribune is revealing:

“The young Lincolnwood couple seemed to have it all: a 5,000-square-foot McMansion, a small fleet of luxury SUVs, $1 million in Facebook stock and a housekeeper and nanny who helped raise their children while they ran a thriving home health care business called ‘Patients First.’

“But Richard and Maribel Tinimbang’s success was built on a lie, according to a federal indictment filed last week that said the Tinimbangs put themselves first, not their patients.

“Federal authorities say the couple’s “nanny” was in fact little more than an indentured servant — a Filipino immigrant whom they had forced to work on threat of deportation — while the couple’s main business was bilking taxpayers.”

In an indictment announced April 6 by Zachary T. Fardon, United States Attorney for the Northern District of Illinois, states that in addition to the health care fraud charges, Richard Tinimbang is accused of submitting fraudulent forms to the U.S. Department of Homeland Security to allow a Filipino woman to legally work in the United States.

Richard Tinimbang stated in the form that the woman would be hired as a business analyst at his mother’s company, Josdan Home Health Care, She was to earn $50,000 a year, thus qualifying her for an H-1B visa. But when the woman arrived in Lincolnwood, Richard and his wife put her to work full time as a nanny for their children and housekeeper for him, his wife and others, the indictment states.

The couple allegedly induced the woman to sign a servitude contract that provided for payment of $66 per day – regardless of the number of hours worked – for a term of seven years. The contract further provided that if the woman quit before the seventh year, she would be required to pay $25,000 in damages.

The Tinimbangs allegedly forced the woman to surrender her passport and sign the contract, the couple threatened to send her back to the Philippines without being paid for the work she had already performed, according to the indictment. 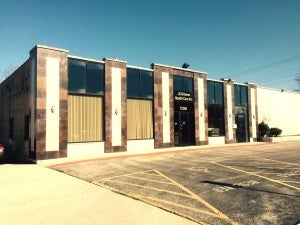 The padlocked corporate building of the three home health care companies owned by the Tinimbangs in Lincolnwood, IL. PINOY

Prior to their involvement in the health care business, Josephine and her then husband, Danny, were known in the Chicago area as the foremost promoter of concerts featuring top entertainers from the Philippines including Martin Nievera, Gary Valenciano, Jose Marie Chan and Kuh Ledesma.

Josephine also made a fortune selling luxurious condominiums to the moneyed members of the Filipino medical community, using the real estate license of her then soon to be ex-husband, Danny, who later widely complained getting the short shrift in their acrimonious divorce.

Josephine and her children were never shy in flaunting their wealth. In her 2010 birthday bash at the Hyatt Hotel in Chicago, one of her guests recalled singer Martin Nievera being pulled out of a Las Vegas engagement to sing a few songs for the occasion. He reportedly returned to Vegas on the same night $15,000 richer.

Richard and Maribel were married in the Chicago area on December 31, 2006. To make true of his promise to his bride that they would again marry in the “longest church” in Manila, a lavish wedding ceremony took place on December 11, 2009 at the Shrine of St. Therese. Maribel wore a Carolina Herrera gown and, with a hired symphony orchestra providing the music, the couple exchanged vows again.

Maribel changed gown with a Vera Wang creation for their splashy reception at the Makati Shangri-la Hotel. Dozens of guests from the States flew in with free plane tickets compliments of the bride, groom and Josephine Tinimbang. As the indictment alleges, it could have been the U.S. taxpayers who actually shouldered the bill.

The lifestyle of the Tinimbangs paraphrases American novelist Scott Fitzgerald– the rich are different from you and I. But then eventually, as in Fitzgerald’s classic novel, even “The Great Gatsby” met his sorry end.

In the case of the Tinimbangs, spending time in prison is a likelihood if convicted. They also face the forfeiture of $45 million, plus the loss of their home, business, stocks and BMW, Land Rover and Mercedes SUVs, Cadillac—among other assets.

The news of their indictment precipitated critical comments from Filipino. “These (frauds) must end,” commented Aquilino Javier, Jr., immediate president of the National Association of Filipino American United Methodists.

A number of home health care owners are expressing grave concerns about how the mainstream community perceives Filipino American health care providers in a negative way. “Many of us run our companies within required standard of practice.

“In fact there some of us earn awards for passing stringent audits of government regulators,” says a manager of another home health care company located near the Tinimbang’s now-padlocked corporate building.

The Tinimbang investigation was carried out by the Medicare Fraud Strike Force, which consists of agents from the FBI and the U.S. Department of Health and Human Services, and prosecutors from the U.S. Attorney’s Office and the Justice Department’s Fraud Section. The strike force is part of the Health Care Fraud Prevention & Enforcement Action Team (HEAT), a joint initiative between the Justice Department and HHS to prevent fraud and enforce anti-fraud laws around the country.

U.S. Attorney Zachary Fardon has made cracking down on Medicare and Medicaid fraud a priority. The Government Accountability Office last year estimated that around $60 billion, or more than 10 percent, of Medicaid payments alone are lost to fraud, waste and other improper payments each year.

The public is reminded that an indictment is not evidence of guilt.  The defendants are presumed innocent and are entitled to a fair trial at which the government has the burden of proving guilt beyond a reasonable doubt.  If convicted, the Court must impose a reasonable sentence under federal statutes and the advisory U.S. Sentencing Guidelines.

To report healthcare fraud or to learn more about it, logon to: StopMedicareFraud.gov.