Poe’s ID defense vs. charge of using fake SS no. may be spurious

BOSTON, Massachusetts – In early March, Ninez Cacho-Olivarez of The Daily Tribune lobbed an explosive allegation that Grace Poe used a fake Social Security number while living in the U.S.

The Poe camp quickly responded by claiming that the number cited (005-03-1988) was in fact her student ID number while she was a student at Boston College (BC). However, a simple inspection of actual student IDs from BC makes that explanation improbable.

The gist of Cacho-Olivares’ allegation was that, while Poe did have a genuine Social Security number, she used a fake one (005-03-1988) in at least three transactions, including the purchase of her family home in Virginia in 1999. An Internet search shows that the fake number was issued to a now-deceased person.

According to Experian, one of the three major credit bureaus in the U.S., most variations in Social Security numbers are results of typographical errors do not necessarily indicate fraud:

“In most cases it is simply a typographical error made when the lender input your application or account information, which was then reported to Experian. For example, your Social Security number may be 123-45-6789. If the lender inadvertently input 132-45-6789, Experian would list it as a variation.”

However, when the lender reports a totally different set of numbers to a credit bureau, then it’s a clearer indicator of fraud: “Totally different numbers may be indicators of fraud, particularly if there is also a name variation or, more importantly, a new or unrecognized account appearing in your report.”

Equifax, another credit bureau, explains that “if the Social Security number is incorrect in the credit file, more than likely a creditor reported the information that way.”

If those who apply for a credit card or a mortgage use a fake number, which people may try to pull to conceal bad credit and/or to leverage the stronger credit of the fake number, then the creditor submits that exact information to the credit bureau, who then adds it to the applicant’s credit file.

Experian, like all credit bureaus, allows people to correct information in their file: “If a Social Security number variation is being reported to Experian by one of your creditors, you should contact the creditor and ask them to correct their records. If the variation is not associated with one of your accounts, Experian can delete it upon your request.”

Anyone who in the past used a different Social Security number for a fraudulent purpose will probably not want to go back and tell the credit bureaus that he or she in fact used a fake number in a completed, especially successful, credit application.

Poe vehemently denied she used a fake Social Security number. In a media conference, she said she wrote Boston College to request a copy of her student ID number and to get official confirmation that it was, in fact, 005-03-1988. It has been more than a month since then, but her camp has not issued an update to clear up the matter.

Poe spokesman Mayor Rex Gatchalian dismissed the Tribune allegation as pure black propaganda, arguing that “there (was) no reason for Senator Poe to secure a fake Social Security number as she (was) of legal status when she stayed in the U.S.” Gatchalian also claimed that the ID number “corresponds to her enrollment date into the college,” which meant she enrolled on May 3, 1988.

Two actual student IDs from BC make improbable the Poe claim that 005-03-1988 was her student ID number. 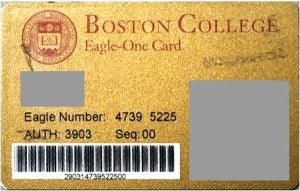 The owner of the above student ID was a BC student between 2007 and 2011. Note that the actual ID number has only eight digits, not the nine digits in a Social Security number. The student ID also does not include any numbers indicative of the date or even the year of enrollment. 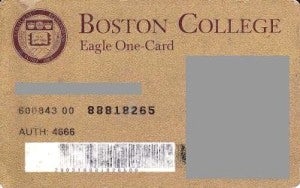 Above is another BC student ID issued in the early 1990s (Poe graduated in 1991). It shows the same eight-digit number as in the newer ID, not the nine digits for Social Security numbers. It also does not include any date or even just the year of enrollment.

The Poe camp’s claim that her student ID number in fact reflected her date of enrollment is also improbable for two obvious reasons. First, that meant all students enrolling on the same day shared the same student ID. At a minimum, an ID system assigns unique numbers. Second, according to BC’s academic calendar, May 3 is around the time students prepare for their finals, not an enrollment period.