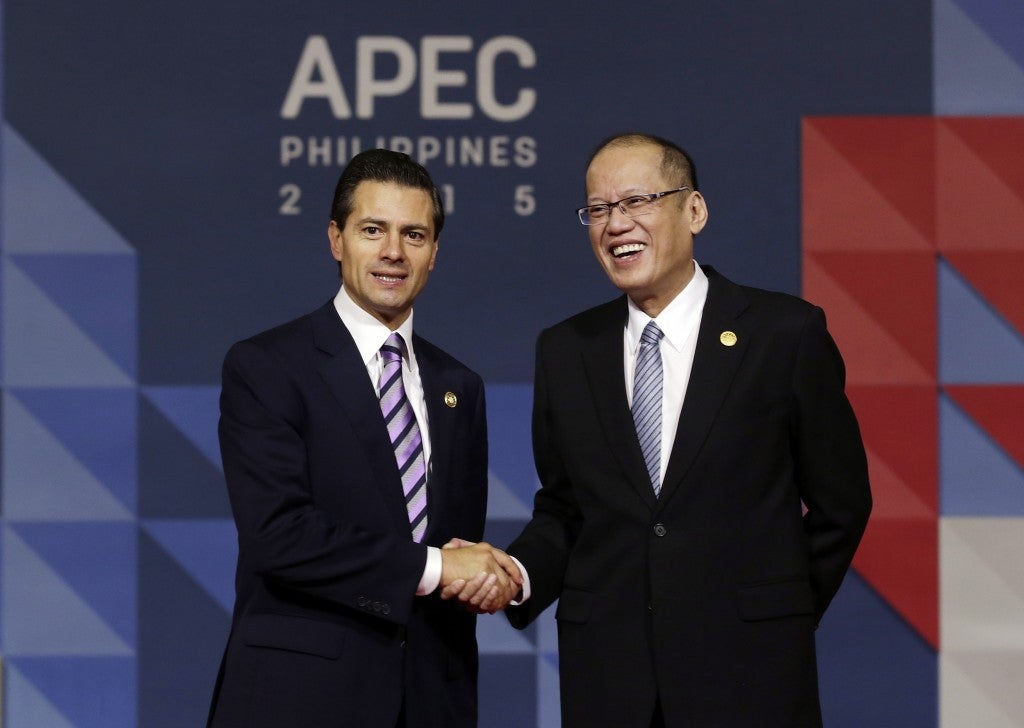 Mexican President Enrique Peña Nieto has left the Philippines on Thursday night after the leaders’ meeting of the Asia-Pacific Economic Cooperation (Apec) Summit 2015 and a state visit.

He departed from Villamor Airbase at 7: 31 p.m.

When he first arrived on Tuesday, Nieto smiled warmly to reporters and replied with “Gracias! (Thank you!)” when he was welcomed to the country.

Nieto has caught the attention of Filipino netizens for his charismatic, movie-star looks. He was pitted against another “Apec hottie”–a title which emerged from a trend started on Twitter by netizens swooning over the two visiting heads of states –Canadian Prime Minister Justin Trudeau. Trudeau’s attendance in Apec was hounded by the issue of container vans of garbage dumped into the country by a Canadian company.

For his state visit, Nieto went to Malacanang Palace for a courtesy call with President Benigno Aquino III. Both leaders also sat down for a bilateral meeting and signed the following agreements: the avoidance of double taxation, tourism cooperation, and cooperation in combating illicit drug trade.

Nieto was also toured at Luneta Park and Intramuros. He was welcomed by television host and Aquino’s sister Kris and former president and now Manila Mayor Joseph Estrada for the ceremonial wreath-laying at the Rizal Monument. Nieto first met the presidential sister in November 2014 when he took a stopover in the Philippines on his way to Australia.

Back in his home country, Nieto’s charms did not spare him from calls for resignation over the missing and probably dead 43 students, who were abducted amid widespread protest against corruption, impunity and a violent drug war.

The student protesters disappeared September last year after they were attacked by the local police in the city of Iguala.

The police allegedly delivered the young men to the Guerreros Unidos drug gang, which has confessed to killing them and burning their bodies.

President Nieto was also embroiled in a corruption scandal for a 2012 purchase of a multi-million dollar mansion from a company that had bagged several contracts from the State of Mexico while he was governor.

First Lady and actress Angelica Rivera was granted a loan to buy the mansion from a company, which also owns a company that was part of a Chinese consortium which won a contract for a high speed rail project. The government canceled the contract and reopened the project for bidding following the controversy.

Nieto was elected in July 2012 amid massive protest against alleged vote buying.