Trade and the “scourge of drug dealing” were among the topics discussed by Philippine President Benigno Aquino III and Mexican President Enrique Nieto in Malacañang on Tuesday, ahead of the Asia-Pacific Economic Cooperation (Apec) Summit.

The two leaders sat down for a bilateral meeting before the signing of the following agreements: the avoidance of double taxation, tourism cooperation, and cooperation in combating illicit drug trade.

“We have undersigned an agreement to avoid double taxation and, by this, enable trade and financial activities between our countries. In the area of terrorism, we will consolidate more cooperation in areas like R&D, education, training, and also in trade promotion and investment activities,” Nieto said during their joint press statement.

“In the area of security, we will exchange best practices and will share information to jointly fight the scourge of drug dealing,” he added.

Aquino dwelt on the shared history and culture of the Philippines and Mexico while Nieto expressed gratitude for the Filipino hospitality.

“Four and half centuries ago, the return voyage of the Legazpi-Urdaneta expedition from Manila to Acapulco commenced almost three centuries of what has come to be known as the Galleon Trade—which to a large degree was our only link to foreign trade,” Aquino said, adding the fact that Mexican airmen fought in the Philippines with the Allied Forces. “Your visit is thus not only a reminder, but also a reaffirmation of nearly half a millennium of relations between us as sister nations.”

Aquino said investments between the two countries have increased because of the expansion of companies like CEMEX, FEMSA and ICTSI.

“I encouraged our brethren from Mexico to further take hold of the prospects of growth that the world now sees in a Philippines that truly works, and to further consider, just as in the old times, their sister country as a gateway for trade and commerce to the rest of Southeast Asia,” he said.

Nieto added that he and Aquino have agreed to “accelerate the conclusion of three important initiatives.” These are the air services agreement, the promotion and protection of investments, and the creation of a joint economic committee.

He said the agreements would pave the way for the creation of “the Mexico and the Philippines Action Plan,” which is supposed to strengthen the relationship of the two countries.

“With this new institutional scaffolding, we will find new collaboration and exchange opportunities,” he said. “The Philippines and Mexico are both stable, strong and dynamic nations with solid economies and a great potential for the future.”

Nieto pointed out that it is Mexico’s first state visit to the Philippines in more than half a century, the last in 1962.

“I would like to thank His Excellency, President of the Philippines, Mr. Benigno Aquino for your graceful hospitality. You have welcomed Mexican delegation graciously,” he said.

Nieto also lauded Aquino for the changes implemented by his administration.

“With vision, they have pushed forward a structural change agenda just as we have done in Mexico in order to face the global challenge of economic slowdown, of financial volatility, and risk aversion,” he said. 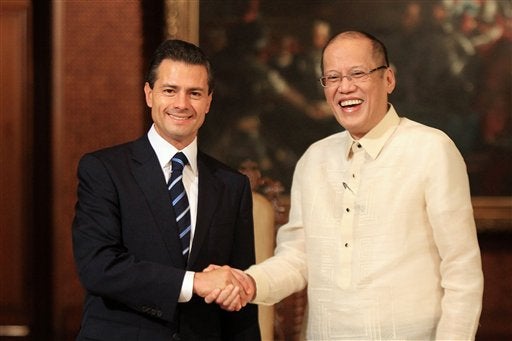