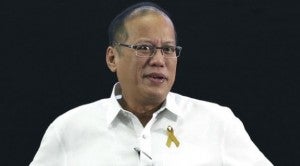 “Naturally, continuing our rehabilitation efforts is our number one priority,” he said in a speech before foreign investors and business leaders at the 3rd Philippines Investment Forum at the Solaire Resort and Casino in Pasay City.

“Through our people’s continued support and participation, and through the aid of our friends in the international community, we have been able to make progress in this regard, and respond to our people’s immediate needs. We are hopeful that moving forward, you will still be there to help us.”

But the President insisted that the rehabilitation of areas devastated by the monster typhoon would not distract the government in dealing with other aspects of country’s development program.

He cited the planned construction of “three new major airports,” on top of the rehabilitation of “more than 50 others in strategic areas,” so it would be “more convenient for tourists to come and experience just how fun it is in the Philippines.”

The President also noted the increased budget for infrastructure projects, from P304 billion in 2013 to “nearly P400 billion” this year.

“Our rehabilitation efforts dovetail seamlessly into our plans for the economy in the medium and long term,” he said.

“I assure you, even as we focus on building back better, we have not dropped the ball when it comes to our most vital industries,” he added, noting that the manufacturing sector grew by 10.5 percent in 2013.

Mr. Aquino acknowledged the need to “stimulate growth” in the agricultural sector, which, he said grew by only 1.1 percent last year, partly because of calamities.

He said the plan would be to “continue developing irrigation mechanisms and agricultural infrastructure, with an eye on creating a more dynamic synergy between our farmers, and the markets and industries in their milieu.”

In tourism, he said the country would make “a run at our 2016 target of 10 million international tourists.”

“I invite all of you here to consider working with us in accelerating the growth of these sectors,” he told foreign investors.

The President said the administration also sought “to create smoother working conditions between the private sector and the government, which will help government consistently harness your efficiencies as we all engage in the communal task of nation building.”

“Opportunities abound, and I, along with my people, am excited to have you alongside us as we tread the path to our shared prosperity,” he told businessmen.

For typhoon victims, he said the goal would be to “empower them to take hold of their destinies once more.”

“And to do that, we must give them the opportunity to work for their personal advancement, and for the advancement of their families and communities,” he said.

“This is how we approach the task of relief and recovery. It is not simply about distributing goods or putting up shelter; it involves coming up with strategies to revitalize the economies in the local communities, to create jobs, and to encourage productivity in the areas in the soonest possible time.”