UNFPA to intensify health services for women in Yolanda-hit areas 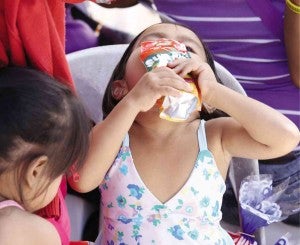 MANILA, Philippines—The United Nations Population Fund (UNFPA) said it would have to spend $16.2 million to address the reproductive health and protection needs of some 3.5 million women and girls of child-bearing age affected by Super Typhoon Yolanda (Haiyan) in the Visayas.

In a statement, the UNFPA said that of the required funding, only $3.3 million—or 20 percent—have been mobilized 100 days into the crisis.

It noted that while recovery efforts have shown some progress, much more should be done to fully bring the affected communities back on their feet.

“Support for the restoration of systems and mechanisms for improved access to life-saving reproductive health care and to ensure the protection of women and girls against violence is among the areas that still needs great attention,” the UNFPA said.

The resources funded more than 60 medical missions, which reached out to more than 12,000 women and girls in the four hardest-hit provinces of Leyte, Eastern Samar, Iloilo and Capiz. The missions provided maternal health care such as pre- and post-natal check-ups, and services to prevent gender-based violence.

Dignity kits, which contain safety and hygiene supplies for pregnant and lactating women, have also been distributed.

Medical equipment, supplies and medicines have been donated to health facilities to ensure clean and safe deliveries during the crisis.

Two Maternity Units, or hospitals in containers, have been set up in Palo, Leyte and Balangiga, Eastern Samar; and 10 ambulances and 21 motorbike ambulances were handed over to local health facilities as transport support for emergency obstetric cases.

To address issues of gender-based violence, 17 women-friendly spaces (WFS) have been established across the four provinces. The WFS serve as a primary venue for raising awareness on gender-based violence, anti-trafficking as well as for psychosocial support with referrals to services for GBV survivors. It also has linkages to cash-for-work programmes.

Despite the achievement, UNFPA said interventions have to be scaled up to sustain the medical missions, pave the way for reconstruction of health facilities, and re-establish functional emergency inter-agency protection mechanism for the prevention and management of gender-based violence.

UNFPA estimates that more than 250,000 pregnant women and 169,000 breastfeeding mothers in the typhoon-hit areas. Some 1,000 childbirths are taking place every day, with 150 expected to experience potentially life-threatening complications.

“Gender-based violence is widespread across the world but the threat escalates during emergencies as the scant protections women and girls have even in times of stability are eroded. Women and girls are also at increased risk of human trafficking, including for sexual exploitation during the crisis,” UNFPA said.

For babies and mothers who survived ‘Yolanda’