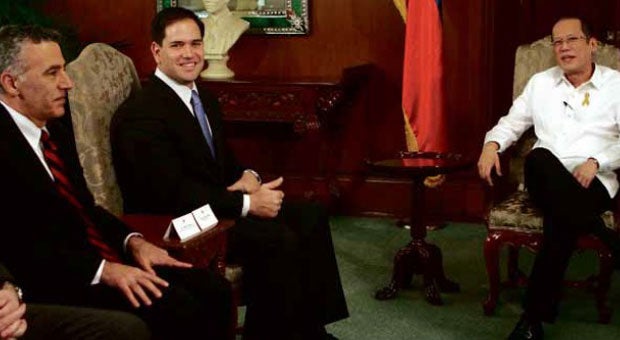 PALACE CALLER US Sen. Marco Rubio pays a courtesy call on President Aquino in Malacañang, accompanied by US Ambassador to the Philippines Philip Goldberg. LYN RILLON

TACLOBAN CITY, Philippines—United States Sen. Marco Rubio on Wednesday assured that the US government would continue to support the Philippines’ rehabilitation efforts in areas devastated by Super Typhoon Yolanda.

“We will continue our partnership [with the Philippine government] and see Tacloban [become] better than ever,”the senator said during his visit to Tacloban City.

However, Rubio, one of the frontrunners for the Republican Party presidential nomination in 2016, did not say how much additional assistance would be given to the Philippines. He merely said he was proud of the American citizens who donated their money for Yolanda survivors.

The US government, which gave $86.76 million in humanitarian aid, is the leading donor for the Yolanda survivors.

Rubio, a high-ranking member of the East Asia and Pacific committee of the foreign relations committee of the US Senate, arrived in Tacloban City around 8 a.m. on board a private plane for a three-hour visit. He was accompanied by US Ambassador Philip Goldberg and Gloria Steele, United States Agency for International Development (USAID) country representative to the Philippines.

Asked if Rubio was in Tacloban to monitor how the government was conducting its relief efforts, Social Welfare and Development Secretary Dinky Soliman replied that the senator came to see what help his country could give to the Philippines.

The national government has been criticized by various international organizations and local sectors in its handling of the relief efforts for Yolanda victims.

Rubio visited the warehouse at the back of the Citi Hardware at Apitong Area in Tacloban City, where relief goods donated by the US and other countries and international organizations were being packed by hundreds of volunteers of the Department of Social Welfare and Development (DSWD).

The US senator also visited the Tacloban Convention Center where more than 400 families were still living in tents. Tacloban City Mayor Alfred Romualdez joined Rubio in his visit.

During his 30-minute visit to the DSWD hub, Rubio was briefed by Soliman on relief efforts being undertaken by the national government, particularly on food distribution to affected families.