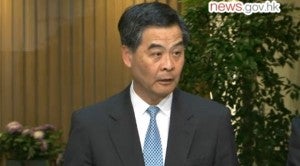 MANILA, Philippines – Diplomatic passport holders and Philippine government officials will no longer be able to go to Hong Kong without a visa beginning today, February 5, after the Hong Kong government announced the “first phase” of sanctions against the Philippines.

Leung Chun-ying, chief executive of Hong Kong Special Administrative Region (SAR), made the announcement in a press conference last January 29 saying that the Philippine government has failed to issue a formal apology over the 2010 Manila hostage crisis.

Eight tourists from Hong Kong were killed in the hostage-taking incident perpetrated by former policeman Rolando Mendoza. He was killed, along with a Filipino tour guide, during the rescue that has been widely regarded as a bungled operation.

Department of Foreign Affairs (DFA) spokesman Raul Hernandez reiterated that the Philippines would not issue a formal apology during a press conference a day following the announcement of the Hong Kong sanction.

Hernandez also said that a “substantive closure” was already achieved with the families of the victims in 2011 along with the previous Hong Kong administration but the present Hong Kong government has reopened negotiations asking again for a formal apology.

“The sanction is unfortunate because a substantive closure on the Quirino Grandstand incident had already been arrived at three years ago with the previous Hong Kong SAR Government and the victims as well as their families,” Hernandez said.

“A total renegotiation has been opened by the Hong Kong SAR Government to seek a demand for an apology which the Philippines, as a sovereign nation, is not prepared to consider,” he said.

Albay Representative Al Francis Bichara on Tuesday warned the government that worse sanctions might come unless a formal apology is issued.

“It would be more embarrassing if we wait for things to get worse before we apologize,” he said.

Paranaque Representative Gus Tambunting however said that the Philippines should not issue an apology saying that the sanctions are too heavy a punishment and that the issue is becoming too one-sided.

There are a total of 195,128 permanent, temporary, and irregular Filipinos in Hong Kong as of December 2012, according to records of the Commission on Filipinos Overseas.