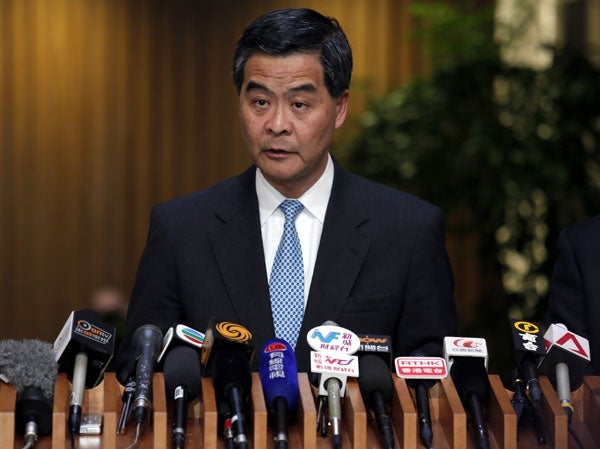 Hong Kong’s chief executive Leung Chun-ying listens to reporters’ questions during a press conference announcing that holders of official Philippine government passports will no longer be allowed to visit for 14 days without visas starting Feb. 5, in Hong Kong Wednesday, Jan. 29, 2014. Hong Kong is making it harder for Philippine officials to visit because their government has not apologized for the deaths of eight Hong Kong tourists nearly four years ago. AP

MANILA, Philippines—Malacañang is negotiating with Hong Kong in light of the diplomatic sanctions against the Philippines over its failure to apologize for a botched hostage crisis more than three years ago.

“You have seen in past days that the Philippine government has kept communication lines open,” Valte said on state-run dzRB Radyo ng Bayan on Saturday.

Hong Kong Chief Executive Leung Chun-ying said on Wednesday that the current visa-free arrangement for visiting Philippine diplomats and officials would be suspended from February 5.

They are currently able to stay 14 days without a visa.

Leung described the move as the “first phase of sanctions” and said the government may take more action if it thought it could be “effective” in securing an apology over the hostage-taking.

Hong Kong has been infuriated by the Philippines’ refusal to apologize for the incident in August 2010, in which a former local police officer hijacked a Manila tour bus in protest at his sacking.

After negotiations broke down, eight people from Hong Kong were killed and seven wounded in a bungled rescue effort by Philippine security forces.

President Benigno Aquino has consistently rejected Hong Kong’s demands for an apology, saying the tragedy was caused by the hostage-taker.

The Philippines has already provided undisclosed financial compensation, with the money donated by private individuals.

Since the crisis, relations have soured between Philippines and Hong Kong, home to some 180,000 Filipinos mostly working as domestic helpers. With Agence France-Presse