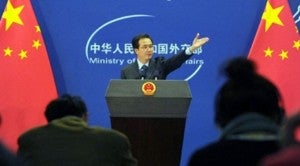 MANILA, Philippines – The word war over the plans of China to establish an Air Defense Identification Zone (ADIZ) in the South China Sea heated up further after Beijing lashed out at the United States (US) and Japan for their “irresponsible remarks.”

“As a sovereign state, China has all the rights to safeguard national security with any means, including establishing the ADIZ in response to the situation of air security,” Hong Lei, China’s Foreign Ministry spokesman, said in a press conference Tuesday.

“No one is allowed to make irresponsible remarks,” he said in response to reports published by Japanese media saying that China plans to establish the said ADIZ and that the US has warned against such a move.

Last February 2, the US Department of State warned China that the establishment of an ADIZ over the South China Sea would be seen as “provocative.”

“We would consider such an ADIZ over portions of the South China Sea as a provocative and a unilateral act that would raise tensions and call into serious question China’s commitment to diplomatically managing territorial disputes in the South China Sea,” Marie Harf, deputy spokesperson of the state department said in a press briefing.

Island groups in the South China Sea are subject of several territorial disputes by Southeast Asian countries including the Philippines and China, which have a pending arbitration case before the United Nations Permanent Court of Arbitration.

China claims the entirety of the South China Sea as its territory including portions of the Philippines 200 nautical mile exclusive economic zone.

China’s previous establishment of an ADIZ in the East China Sea was met with widespread criticism because it covered an island group that was the subject of a territorial dispute between China and Japan.

The US defied the ADIZ by sending military airplanes into the airspace covered by the ADIZ and not identifying themselves to Chinese authorities.

“We’ve made very clear that parties must refrain from announcing an ADIZ or any other administrative regulation restraining activity of others in disputed territories. And we would of course urge China not to do so,” Harf said.

Hong Lei lashed out at Japan saying that it has ulterior motives for publishing such stories.

“This move is of ulterior motive and simply aimed at diverting the international attention and covering up its attempt to revise the pacifist constitution and expand its military power,” Lei said.

“We sternly warn these forces not to mislead public opinions with rumors and play up tensions for their own selfish gains. China hopes that relevant parties could be cautious about their words and deeds,” he said.