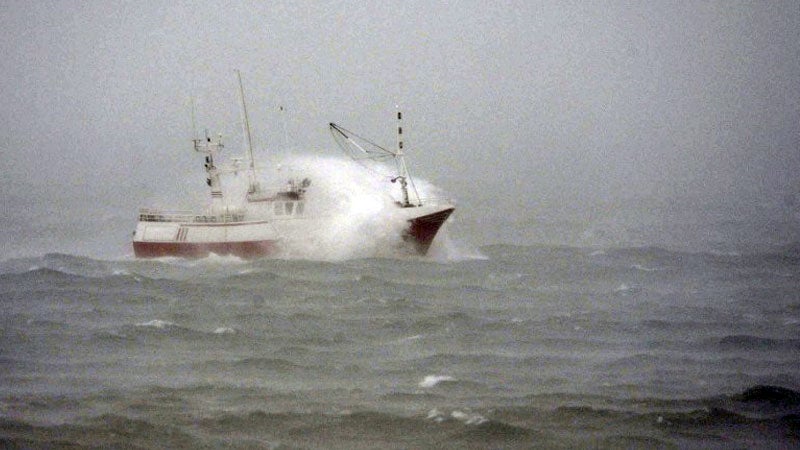 A fishing boat is hit by a wave near the coastal city of Burela, northwestern Spain, on Tuesday, Feb. 4, 2014. Spanish coastguards rescued five Filipino sailors by helicopter after the seamen’s boat got caught in a storm on Tuesday off northwestern Spain, where fresh sea gales were growing, authorities said. AFP PHOTO/MIGUEL RIOPA

MADRID—Spanish coastguards rescued five Filipino sailors by helicopter after the seamen’s boat got caught in a storm on Tuesday off northwestern Spain, where fresh sea gales were growing, authorities said.

The five were lifted from the Esnaad 715, an Emirates-flagged supply ship, which was “in danger of sinking” 50 nautical miles from the Spanish port of La Coruna, the national coastguard said in a statement.

“The rescue operation was complicated by the adverse weather conditions in the area, with southeasterly winds of 45 knots,” equivalent to more than 80 kilometers, or 50 miles, an hour, it added.

It said the coastguard had brought the sailors to land in the nearby Spanish port of Viveiro and sent a tugboat to assess the situation of the Esnaad, which had been on the way from the Netherlands to Abu Dhabi.

Fierce waves were pounding seafronts and fishing boats off northern Spain, where authorities issued alerts for storm tides and strong winds for Wednesday, with snow forecast in some places.

On Sunday, authorities said a boy was swept out to sea as storm surges hit Galicia and other northwestern regions. He has not yet been found.