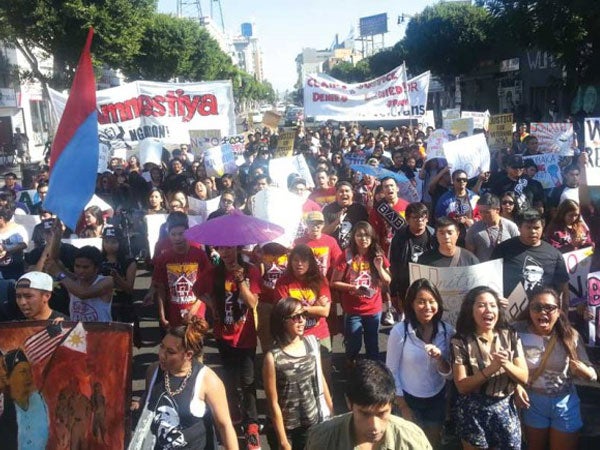 HOLLYWOOD – In a youthful show of solidarity, as many as 800 Filipino-American students gathered in Hollywood last Monday to show support for their lolos (grandfathers) and lolas  (grandmothers) on Veterans Day.

Led by Justice for Filipino American Veterans (JFAV), a grassroots organization supporting the cause of WWII FilVets, Fil-Am students from as far as San Diego and Long Beach staged a Veterans Day protest along Hollywood Boulevard, marching from Vine Street to Highland Avenue.

According to JFAV community leader Arturo Garcia, they decided to do the protest in Hollywood because it is the entertainment capital of the world — a place where they will surely attract a lot of attention, as opposed to their previous protest venues.

“When we were doing the rallies in downtown, the federal building is closed [on Veterans Day], so nobody will listen to us!” Garcia explained, “So we bring it to the bar of public opinion.”

The protest culminated in front of the TCL Chinese Theater where advocacy group leaders took turns to address the throng of people gathered there. “We stand in solidarity with the JFAV-LA campaign!” Mike Pedro of LAKAS Mentorship Program said.

“I want everybody right here to say ‘thank you’ to the veterans for giving us what we deserve here [sic],” Pedro said. “We should give them thanks and praise.”

“LAKAS stands in solidarity with the JFAV-LA campaign. We implore you all to be involved in this campaign, we need new leaders to step up!” he added.

In statement released at the protest, JFAV said that contrary to popular perception, the Filvets’ quest for justice and equality is not yet over even if they have already received their so-called lump sum payment for their wartime services.

“The public must know that at least 24,000 Filipino World War II Veterans – or more than 52 percent – out of the 41,000 [veterans] and widows who applied for their claims were denied of their lump sum claims. This is the sad truth and the hard facts,” JFAV said.

According to JFAV’s statement, the American Recovery and Reconstruction Law passed in 2009 did not give recognition or justice for the FilVets and their survivors. Instead, more injustices were perpetrated against Filipino veterans under this law, JFAV pointed out.

The aging veterans rode in a caravan of cars to join the protest march and understandably so. Some of them, in their ripe old age, couldn’t endure the half-mile walk from Vine to Highland. But that didn’t stop them from taking part in what has become a yearly activity for the past few years.

Walking in the veterans’ stead were the young students, mostly Filipinos, who supported their cause. The protest brought together Filipinos.

With some of their banners and placards bearing catchy phrases like “Don’t say no-no to my lolo,” the students made sure that the vets were the center of attention on Monday.

Celine Castellano of California State University Long Beach (CSULB) lauded the “brave veteranos [sic] who gave their lives to fight for this country so that we may have the privilege of living here.”

“We demand the justice and respect they deserve,” Castellano said. “We will not stop until it is given. We stand along the manongs and manangs and stand up for what is right!”

For some students, coming out to the Veterans Day protest has become more like an annual ritual. “Actually, this is my third time coming out here for the JFAV rally,” Mark Carmona of CSULB told Asian Journal.

“It’s very empowering to see this many people from the Filipino community to come here and fight for the rights of our Filipino veteranos. It feels good,” Carmona added.

Some of the veterans also took the opportunity to connect with the younger Fil-Ams. After the protest’s main program, some students gathered around some of the vets to hear their war stories.

“It becomes a little more personal when you hear them talk about [their war stories] face-to-face,” Joanna Villegas of CSULB said, “It’s different from just reading about it in a book or hearing it from your parents.”

Villegas also said that being talking to the FilVets face-to-face makes the protest experience “more personal.”

“It makes you want to do something about it. It makes you realize how unfair and how unjust it is [that the vets are still fighting for their benefits],” she added.

For Arturo Garcia, JFAV community leader in Los Angeles, it was heartening to see hundreds of Filipino youths attend the Veterans’ Day protest.

Garcia said that it was important for the next generations of Filipinos to take part in the Filvets’ advocacies because they will be the ones who will continue on with the fight for their lolos and lolas.

“They will continue the fight of the veterans, that’s why we’re passing the baton to them,” Garcia said.

It is a sad reality that Filvets are slowly dying out. Garcia predicted that in five years, there will only be a handful veterans left behind to carry on with their struggle for recognition.

Iraq water veteran Mike Prysner of AnswerLA chose to join in the Filipino-led protest instead of joining in any of the other Veterans Day events across Los Angeles.

Prysner said that although he is among the younger generations of US Armed Forces veterans, he shares the same struggles that the Filipino WWII vets face: denial of services, inadequate health coverage, finding jobs and dealing with combat trauma.

“It’s something that we feel closely [to],” Prysner said.

“Knowing that these WWII veterans are in a much more difficult position [than us], we understand that these struggles are connected. We need to be uniting with veterans of all generations, to be building a grassroots movement to win rights for all vets.”

California lawmaker calls for better services for US veterans