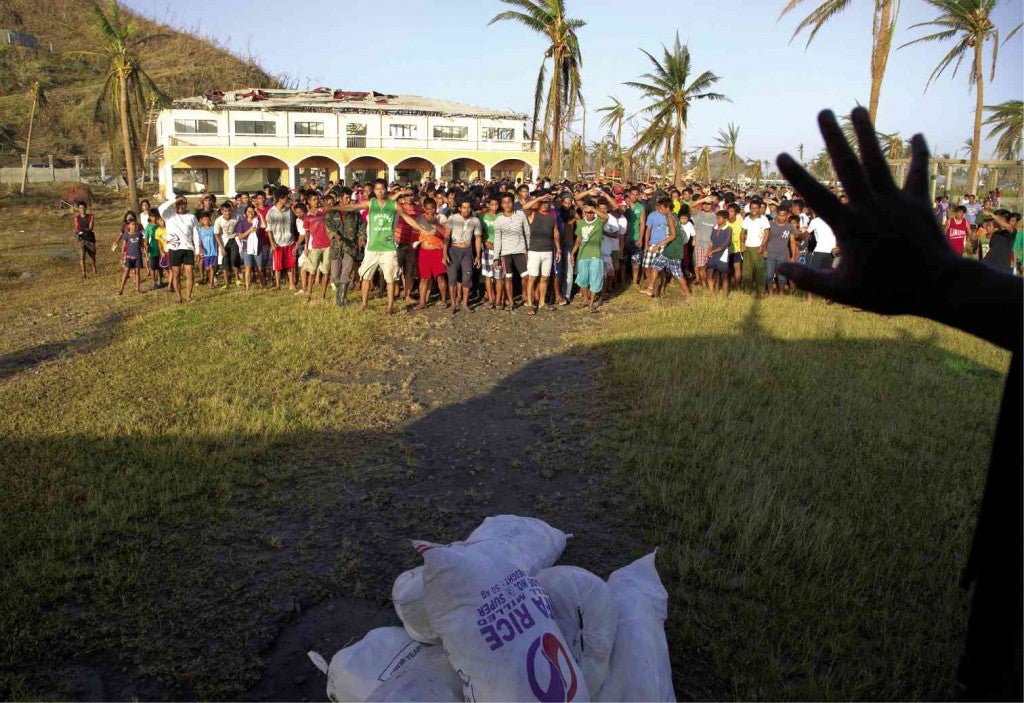 TANAUAN, LEYTE Supertyphoon “Yolanda” survivors in this town wait for the distribution of food items from a helicopter in this photo taken two days after Yolanda struck. JOHN CHUA/INQUIRER

NEW YORK—Journey is donating $350,000 to help relief efforts in the Philippines, and its lead singer has a message for his homeland: “Don’t Stop Believin’.”

Arnel Pineda, a Filipino, and the rest of the band announced the donation on Friday.

The donation will go to the United Nations World Food Program, which is providing Filipinos with food assistance. The donation should provide 1.4 million meals.

In a statement, Pineda referenced the group’s famous “Believin’” song and said “help is on the way.”

Journey made the donation along with Live Nation Entertainment, Creative Artists Agency and their manager, John Baruck.

The central islands of the country were devastated by Supertyphoon “Yolanda” (international name: “Haiyan”), which has left more than 3,600 dead and displaced 600,000, according to authorities.

Journey is also calling on fans to donate to the cause.

Spearheaded by a US aircraft carrier group, foreign relief efforts have stepped up a gear in the storm-devastated Philippines eight days after the monster storm struck the Philippines.

Ships and planes from Asia-Pacific nations and Europe have converged on the belt of Philippine islands hardest hit by Yolanda, one of strongest storms to ever make landfall.

The air- and sea-lift has also brought in emergency medical and shelter supplies from global humanitarian groups that have warned of the dangers facing remote, hard-to-access communities.

The United States, which used to rule the Philippines as a colony, is by far the greatest contributor to the effort, spearheaded by the giant USS George Washington.

Below is a breakdown of the international aid being offered:

In addition to the delivery of relief supplies, US military aircraft have logged nearly 480 flight hours in 186 aircraft sorties, moved nearly 1,200 relief workers into hard-hit Tacloban City and airlifted nearly 2,900 displaced people from the affected areas to date.

Over the last 24 hours, more than 118 tons of food, water and shelter items have been delivered to Tacloban, Borongan and Guiuan, both on Samar Island, the US military said.

More than 600 US military personnel are currently on the ground in the Philippines, with 6,200 sailors supporting air operations from the USS George Washington strike group. An additional 1,000 Marines and sailors with the 31st Marine Expeditionary Unit are expected to arrive in approximately five days.

Eight American MV-22 Ospreys—rotor planes that can take off and land like helicopters—are currently in operation, and eight more are being deployed.

In other contributions, Britain is sending its largest naval ship, the helicopter carrier HMS Illustrious. Also from Britain, heavy transport planes carrying equipment, such as 4X4 vehicles and forklift trucks, have already arrived.

British Prime Minister David Cameron announced on Saturday that Britain was providing a further $48 million to help the relief effort, on top of $37 million already pledged.

“We are also deploying an RAF C-130 aircraft to help ensure that aid workers move between the worst-affected areas and get the aid to those who need it most,” Cameron said in Colombo, Sri Lanka, where he was attending a Commonwealth summit.

The RAF C-130 landed at Cebu-Mactan International Airport on Saturday, with British Ambassador to the Philippines Asif Ahmad greeting the flight and overseeing the unloading of relief supplies.

The United Nations, which had launched an appeal for $301 million in relief funding, said on Friday it had so far received $72 million.

Japan has tripled its emergency aid package to more than $30 million and is preparing to send up to 1,000 troops in what would be the country’s biggest foreign deployment since World War II.

The European Union upped its contribution by $7 million on Saturday to $20 million.

Other C-130s—a war-horse of relief operations the world over—are being deployed by countries including India, Indonesia, Japan, Malaysia, New Zealand, Singapore, South Korea, Sweden, Taiwan and Thailand, as well as by UN agencies and private charities.

Other military transporters and aid flights have arrived or are en route from Belgium, Canada, France, Germany, Italy, the Netherlands and Spain, among other countries.

China, which is locked in a territorial dispute with the Philippines, has promised $1.6 million in aid, mainly in tents and blankets, after widespread criticism of its initial modest response of a $100,000 government donation.

China said on Saturday it was ready to fulfill its aid pledges to the Philippines and help in the reconstruction of storm-ravaged Eastern Visayas.

“We are currently focusing on the prompt delivery of the supplies we pledged to the Philippines, which are fully ready now in China. We are waiting for the go-signal from the Philippine side. It’s expected to arrive anytime soon,” Zhang said.

Kuwait and the United Arab Emirates have given $10 million each to the UN appeal for donations.

The UAE also extended its deepest sympathies for the loss of life and property in the Philippines.

“The UAE believes the international community must stand together in times like these and assist the relief efforts. With this contribution, the UAE government affirms its deep solidarity with those affected by this natural disaster in the Philippines,” the statement said.

“We have to keep our foot on the accelerator. Too many people have not received assistance but they should know that the assistance is on the way,” Ging said.

Thaicom Plc. has installed communication lines using its IPStar or Thaicom 4 satellite in the typhoon-ravaged areas.

Thaicom CEO Suphajee Suthumpun said the equipment would provide Internet connection and voice call services in Tacloban and other cities in the Visayas.

Israel is also involved in the response to Yolanda, with about 150 members of the Israeli Defense Forces Home Front Command setting up a field hospital in Bogo City in northern Cebu province.

On Friday, the Israeli army medics delivered a mother, who named her baby Israel.

Outpouring of support for ‘Yolanda’ relief