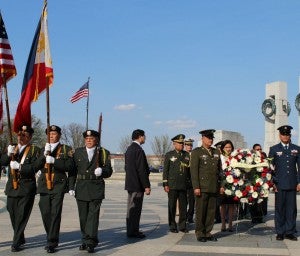 WASHINGTON, D.C.– Leaders of the Filipino American community in this city, Philippine Embassy officials, students and supporters of Filipino World War II veterans on Tuesday marked the 71st anniversary of the Fall of Bataan by pledging to continue the fight to negate the effects of the 1946 Rescission Act, which stripped Filipino soldiers of their official status as U.S. military veterans,

Their immediate demand: recognize the claim of more than 24,000 surviving veterans whose service certifications have been rejected by the U.S. Army. A bill providing monetary compensation to eligible veterans was signed into law by Pres. Barack Obama in 2009. But of the 43,000 claims of surviving veterans who applied for benefits under the Filipino Veterans Equity Compensation (FVEC) Act, only 18,615 were granted.

“The Fall of Bataan is considered one of the darkest moments in our nation’s history,” said Philippine Ambassador Jose Cuisa, Jr. “We recognize the injustice done to those who have been denied because of documentary requirements and we will continue to press the relevant US government officials to clarify the procedures in certifying claims and to assist our veterans who are appealing.”

The embassy is calling on the Filipino American community to join a nationwide letter-writing campaign to the White House. “We want to bring attention to the injustice caused by the certification process,” Cuisa added.

In response to public pressure, the White House six months ago formed an interagency task force to examine the more than 4,000 appeals submitted by veterans in the last three years. Their claims had been summarily denied because their names were not on the so-called “Missouri List,” the official 1948 file of those who served in the US Armed Forces of the Far East (USAFFE).

Celestino Almeda, 96, a World War II veteran who lives in Arlington, Virginia, is among those whose claim was denied. He is calling on Pres. Obama to issue an executive order directing the U.S. Army “to recognize our services as World War II veterans. We have waited and waited for action on our veterans’ recognition problems. All we are asking is for the U.S. government to update its policies that unfairly excluded thousands of deserving comrades who honorably served in the USAFFE.” Almeda is a member of the American Coalition for Filipino Veterans (ACFV), one of the national groups that have lobbied for veterans benefits.

Ret. Maj. Gen. Antonio Taguba, a champion of veterans’ rights, said that he was “troubled by the inaction of the interagency task force.” He has personally called on congressional leaders, like Sen. Maize Hirono of Hawaii, to pass a bill recognizing the legitimate claims of all surviving Filipino veterans. 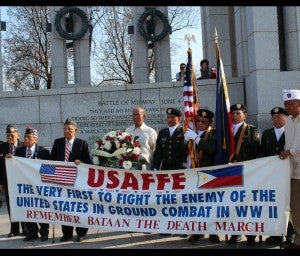 Filipino American community leaders, supporters, students and Philippine Embassy officials observing the 71st anniversary of the Fall of Bataan with a wreath-laying ceremony on April 9 at the World War II Memorial in Washington, D.C.

But with the loss of champions like Sen. Daniel Inouye, who died last year, and Sen. Daniel Akaka, who retired recently, Taguba recognizes that it may be difficult to get another veterans bill through. “That will happen only if our own community is rock solid in putting pressure on Congress.”

Hirono and Rep. Colleen Hanabusa (D-HI) recently introduced in the Senate and in the House the Filipino Veterans Family Reunification bills (S.461 and H.R. 966) that would fast-track the reunification of Filipino World War II veterans and their families.

“The brave servicemen who are still with us, now in their eighties and nineties, should not have to wait any longer in order to be reunited with their children,” Hirono said. “As the Senate dives into immigration reform legislation, I will be working very closely with my colleagues to include these types of ideas in the final proposal.”

Given the backlogs affecting Filipino immigration applications, veterans have had to wait for as long as 20 years to reunite with their children. If passed, the fast-track bill will ensure that veterans and their families will be reunited much sooner, rather than later when it’s too late.

Chances for its approval look good because of bipartisan efforts to pass a comprehensive immigration reform measure.

Read Next
LP candidates on way to rally lost at sea, end up in Sabah jail
EDITORS' PICK
The Najima Drive: Nissan’s MD drives #GoAnywhere adventures in new video series
Can Your Brand of Meat Be Trusted? Here’s How to Know You’re Eating Safe Meat
Xi’s early involvement in virus outbreak raises questions
COVID-19 has infected more than 69,000 people globally
Can travel make you fall in love?
COVID-19 screening checkpoints remain for those going to Boracay
MOST READ
WATCH: Sarah Geronimo dances ‘fierce’ version of ‘Tala’
NBA loses ‘hundreds of millions’ in China over Hong Kong tweet
2,000 iPhones given for free by Japanese gov’t to passengers stuck on ship due to coronavirus
Xi’s early involvement in virus outbreak raises questions
Don't miss out on the latest news and information.