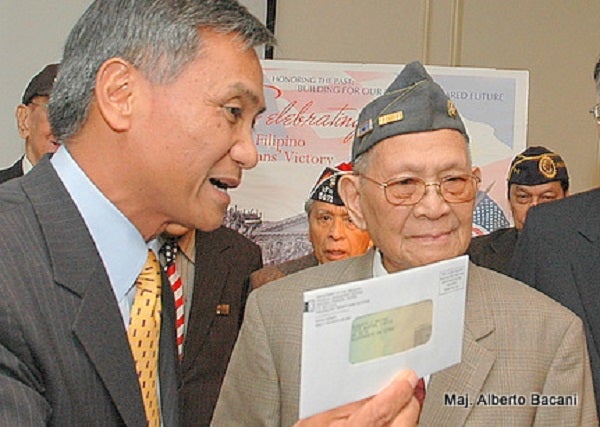 Retired US Army General Antonio Taguba presented to Bacani the first US government equity check amounting to $15,000, on behalf of the Secretary of the US Department of Veterans Affairs, during an event commemorating the
Bataan Day of Valor at the Philippine Embassy in Washington D.C. Photo by Eric Lachica 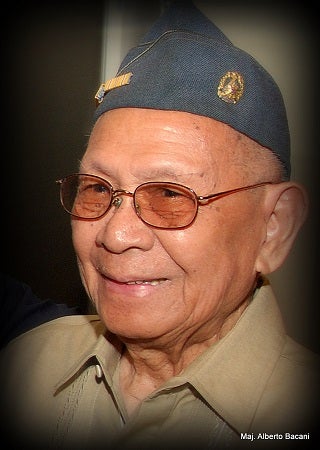 Bacani, who was from Isabela, died on Tuesday in Alexandria, Virginia. He was 102.

He was the first Fil-Am veteran to be recognized by the Secretary of the U.S. Department of Veterans Affairs under the 2009 Filipino Veterans Equity Compensation law.

After the war, Bacani worked as a teacher and school principal, and later as a registrar at the University of the East. He retired in 1976 and migrated to the US.

Bacani worked as a librarian at the US Environmental Protection Agency (EPA) in Crystal City, Virginia. The EPA library reading room was named after him when he retired after 34 years of service at the age of 98.

Bacani, even in his nineties, continued to actively advocate for the rights and welfare of WWII veterans. As a member of the Washington DC-based American Coalition for Filipino Veterans, he frequently lobbied senators, members of congress and US presidents for support of Filipino veterans equity bills. He died less than a week before Veterans Day, a national
holiday honoring US war veterans.
Bacani is survived by his three children, Dr. Robert Bacani, Lyda Miranda, and Milagros Cabagnot; 15 grandchildren; and 31 great-grandchildren. He was predeceased by his wife, Saturnina, and children, Vina Narciso and Jose Alberto Bacani.

A funeral mass will be held on Saturday, Nov. 9, at 9 a.m. at Saint Rita’s Catholic Church in Alexandria. Burial is scheduled at 11 a.m. at the Quantico National Cemetery in Virginia.