Marcos meets with World Bank executives during US working visit 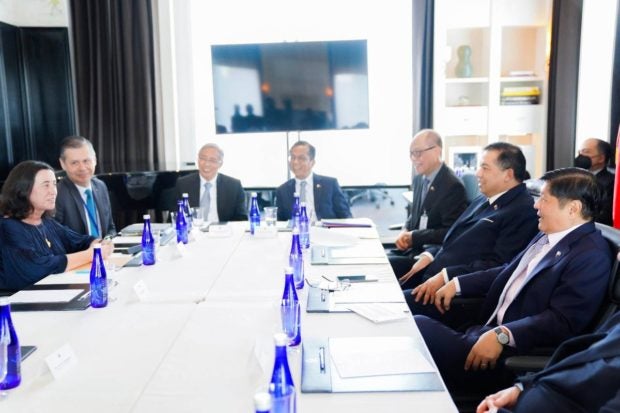 Marcos said he is “privileged” to meet with the bank officials, including World Bank President David Malpass. (Photo from Bongbong Marcos Twitter page)

In post on his Twitter page on Thursday, Marcos said he is “privileged” to meet with the bank officials, including World Bank President David Malpass.

The President also noted the Philippines’ partnership with World Bank since 1945, saying he is “incredibly grateful and proud” to continue partnering with the international financial institution.

“We are privileged to meet with World Bank Group officials on our fourth day in the United States,” Marcos said about the meeting, which was held on Wednesday (Thursday Manila time).

“The World Bank has stood with the Philippines in the most challenging times, bringing resources, linkages, and partnerships to bear on the country’s social, economic, and environmental initiatives since 1945,” he added.

“We are incredibly grateful and proud to continue partnering with the World Bank to improve the lives of Filipinos,” the President continued.

We are privileged to meet with World Bank Group officials on our fourth day in the United States. pic.twitter.com/jcA20pP42F

Marcos Jr.’s meeting with World Bank was made on the sidelines of the 77th session of United Nations General Assembly.

Read Next
Around 280 illegal Chinese POGO workers face deportation
EDITORS' PICK
House energy committee chair Arroyo bats for cheap electricity
PNP vows to bring justice for slain Percy Lapid; says probe underway
Percy Lapid’s kin: ‘We demand that his cowardly assassins be brought to justice’
‘Seniority’ requirement despite vacant posts in DOH bothers senators
Nothing’s certain so here’s how everyday Filipinos can make the most out of their Plan B
Do all the things you do, faster
MOST READ
Student stabs teacher dead in Samar town
Not rehired?: Trixie Cruz-Angeles not on list of reappointed Cabinet execs
Final net satisfaction rating slightly decreases for Robredo, Sotto — SWS
Heart Evangelista to stay abroad ‘indefinitely’: ‘Hindi muna ako babalik’
Don't miss out on the latest news and information.