Marcos: I cannot see PH future without US as partner | Global News 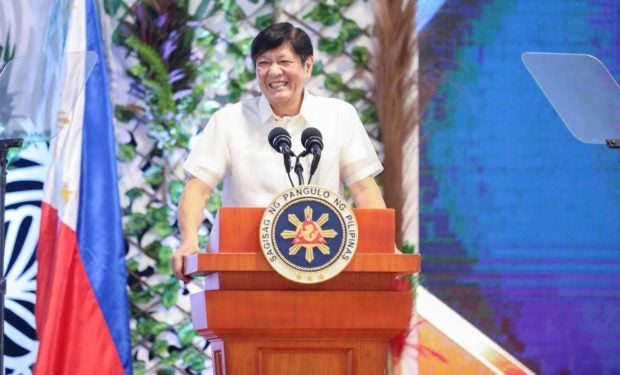 In his remarks at the New York Stock Exchange on Monday (Tuesday, Manila time),  Marcos pointed out how American corporations are among the drivers of the Philippines’ early economy, adding that the strongest corporate benefactors to the government were from the US.

“It is very clear to me in my vision for the way that the country will move forward that I cannot see the Philippines in the future without having the United States as a partner,” he said.

Marcos said the strength of the US-Philippines continued through the times and is seen to further solidify.

“I believe that the political, economic, diplomatic relations that we make, the partnerships that we forged and that we strengthen now are going to be extremely necessary for the simple reason that they provide stability in this highly unstable economic, political, geopolitical, and diplomatic environment,” he said.

The President noted how the Philippines has adjusted its ways of doing business “at the behest” of the United States and American businesses.

This, he said, will give both countries “great opportunities in the future,” including its private corporations, government-to-government agreements and arrangements.

“We have really opened up the policy of the Philippines to more of these public private partnerships (PPPs). But not only PPPs but also government-to-government arrangements, as I mentioned, joint ventures between private entities,” Marcos said.

After delivering his remarks, Marcos signed the guest book at the New York Stock Exchange and rang the closing bell, which signifies the closing of the session of the day.

Meetings with US firms

Marcos earlier in the day met with American firms related to energy and defense.

He first met with NuScale Power, which designs and markets small modular reactors, then he met with Wastefuel, a California-based next-generation waste-to-fuels firm.

He likewise met with Boeing, which is among the largest global aerospace manufacturers and among the top defense contractors worldwide.

Marcos also had a business lunch with the US-Philippine Society at the Brook Club.

Monday marks the second day of Marcos’ working visit to New York, United States. On Tuesday, he will be delivering an address at the United Nations 77th General Assembly.

During his departure speech in Manila on Saturday, Marcos said he would bring up “economic recovery, food security, and agricultural productivity” during his speech at the UN high-level debate.