In US visit, Marcos cites role of OFWs in recovery | Global News 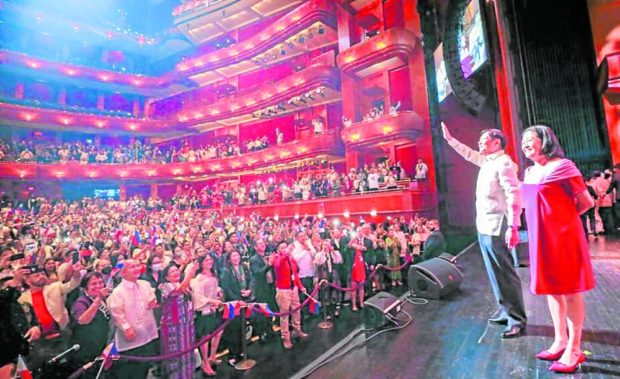 WARM WELCOME President Ferdinand Marcos Jr. and his wife, first lady Liza Araneta-Marcos, receive a warm welcome from Filipinos based in the United States and Canada at the New Jersey Performing Arts Center on Sept. 18 (Monday, Philippine time).  Marcos is on a six-day visit to the United States, where he will address the United Nations General Assembly and meet with other world leaders. —MALACAÑANG PHOTO

NEW YORK CITY — President Ferdinand Marcos Jr. began his six-day inaugural visit to the United States by meeting with members of the Filipino community, whom he thanked for their sacrifices and contributions to keeping the Philippine economy afloat amid the COVID-19 pandemic.

“We have over 10 million kababayans all over the world and as your president, I understand and know fully well the significant impact of the Philippine diaspora on our motherland, especially in terms of supporting our post-pandemic economic recovery,” he told some 1,200 Filipinos who had come from as far as Canada to see him at the New Jersey Performing Arts Center in Newark, New Jersey.

Marcos said that dollar remittances from overseas Filipino workers (OFWs) hit an all-time high of $34.88 billion in 2021, compared with $33.19 billion in 2020, even if many were affected by lockdowns.

About 40 percent of total remittances last year came from OFWs in the United States.

“You set this record-breaking figure even when many of you were affected by the COVID-19 pandemic… When you send your remittances, I know you’re thinking of helping your family. But even if you don’t feel it, (your remittances) are not only a big help to the Philippine economy, it keeps [it] afloat,” he said.

The president also paid tribute to Filipino nurses, healthcare workers, and other frontliners, especially in New York City and surrounding areas which became the epicenter of the COVID-19 pandemic in the United States in 2020.

Marcos and his official delegation arrived at Newark Liberty International Airport in New Jersey at 11:53 a.m. on Sunday (11:53 p.m. on Monday in Manila).

Along with others from his inner circle, he took a breather on his first night in the Big Apple by watching the concert of British legendary guitarist-singer Eric Clapton at Madison Square Garden.

At the Filipino community gathering, the President said that New York bore a “special meaning” for him and his wife, first lady Liza Araneta-Marcos, because they met there in 1986. He added that they had not been back for 25 years.

“In 1986, we met in court while I was waiting for [the hearing] of a case of my mother [former first lady Imelda Marcos] and she was visiting because one of our lawyers was her friend, then that’s it,” Marcos said as the audience cheered.

“So Sandro, thank New York. If not for New York, you won’t be here,” he added, addressing his eldest son, Ilocos Norte Rep. Ferdinand Alexander Marcos III who was also on the stage, drawing more cheers from supporters.

The president will be in New York until Sept. 23 primarily for the ongoing 77th session of the annual United Nations General Assembly (UNGA). He will join more than 100 heads of state who will deliver their respective policy speeches before the biggest diplomatic stage.

He will be the second speaker in the afternoon session of the high-level general debate on Sept. 20.

“I am hoping to be able to meet (US) President Joe Biden and other world leaders on the sides of the UN General Assembly,”  Marcos said.

“Aside from President Biden, I think we will be able to meet with some other heads of state and as I said some heads of big companies… Our relations with the United States remain strong and I believe we will make them stronger in the coming years,” he added.

He said his visit would highlight his administration’s thrust for recovery after the pandemic.

The day before his speech before the UNGA, Marcos will be a guest at the New York Stock Exchange where he will participate in an executive forum and the closing bell of the trading.

The members of his economic team will hold a briefing on the Philippine economy on Sept. 22, the fifth day of the visit.

Among those who joined him for the US trip were his son Joseph Simon Marcos, House Speaker Ferdinand Martin Romualdez, Special Assistant to the President Antonio Lagdameo Jr., 11 Cabinet officials, as well as economic managers and business leaders and executives.

TAGS: Ferdinand Marcos Jr., Filipinos in the US, Marcos US working visit, ofws