Marcos meets Biden in first bilateral talks between PH, US in years 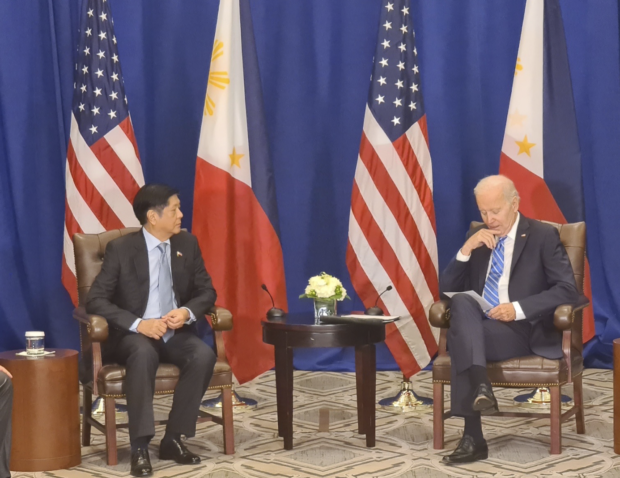 The meeting was made during the sidelines of the 77th session of the United Nations General Assembly.

According to the readout of the meeting released by the White House, President Biden reaffirmed the US’ “ironclad” commitment to the defense of the Philippines.

The leaders also discussed the situation in the South China Sea, underscoring their support for freedom of navigation and overflight and the peaceful resolution of disputes.

Russia’s war against Ukraine and its implications for energy prices and food security, was also discussed during the meeting, as well as matters concerning the Association of Southeast Asian Nations, the crisis in Myanmar, and the importance of upholding human rights.

Before the bilateral meeting proper, the two leaders first delivered their statements.

In his remarks, Biden pointed out how the United States and the Philippines’ relationship has “very deep roots” despite having “some rocky times.”

“The relationship between the United States and the Philippines, to state the obvious, has very deep roots. We’ve had some rocky times, but the fact is it’s a critical, critical relationship, from our perspective. I hope you feel the same way,” Biden told Marcos.

Biden said he hopes to discuss during the bilateral meeting how to continue strengthening US-Philippines ties and work together “on things that have greatest concern” to the Southeast Asian nation.

For his part, Marcos noted how the relationship between the two nations “continues to evolve,” saying there is “much to discuss” in terms of redefining the US-Philippines ties.

“The 100-plus-year-old relationship between the Philippines and the U.S. continues to evolve as we face the challenges of this new century and the events that we have been watching over the past few months, really. So, we have very much to discuss in terms of redefining, I suppose, in many ways,” Marcos replied.

The Philippine President also reinforced the country’s ties with the US.

Marcos’ meeting with Biden signals the pivot in the Philippines’ foreign policy towards the US since his predecessor, then President Rodrigo Duterte, leaned to China and Russia.

With this, Duterte did not set foot in the US during his entire six-year term.

The former President, however, was able to meet with then US President Donald Trump when the American leader went to Manila in 2017 for the Association of Southeast Asian Nations Summit.

Thursday marks the fifth day of Marcos’ working visit here in New York to participate in the UN General Assembly.

The President also met with executives of several US-based firms.

The American President was the first foreign head of state to formally extend such a gesture to Marcos, days after he took his oath as the Philippines’ chief executive.

Malacañang said President Biden only granted Marcos’ request to see him out of 48 requests from other world leaders.

Read Next
Marcos meets with World Bank executives during US working visit
EDITORS' PICK
House energy committee chair Arroyo bats for cheap electricity
PNP vows to bring justice for slain Percy Lapid; says probe underway
Percy Lapid’s kin: ‘We demand that his cowardly assassins be brought to justice’
‘Seniority’ requirement despite vacant posts in DOH bothers senators
Nothing’s certain so here’s how everyday Filipinos can make the most out of their Plan B
Do all the things you do, faster
MOST READ
Student stabs teacher dead in Samar town
Trixie Angeles quits as press secretary due to health reasons
Not rehired?: Trixie Angeles not on list of reappointed Cabinet execs
Heart Evangelista to stay abroad ‘indefinitely’: ‘Hindi muna ako babalik’
Don't miss out on the latest news and information.