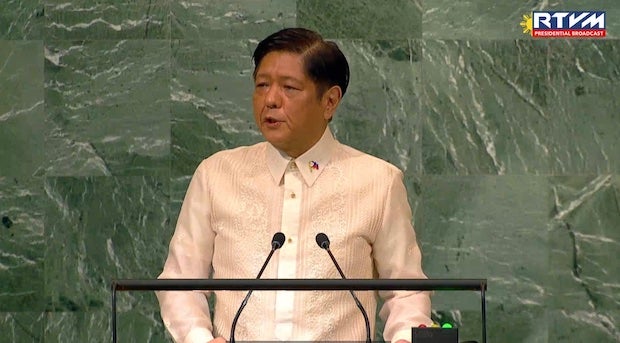 President Ferdinand Marcos Jr. in his address to the UN General Assembly on Tuesday, Sept. 20, 2022 (Wednesday, Sept. 21 in Manila). (Photo from an RTVM video posted on Facebook)

“My country’s experiences in building peace and forging new paths of cooperation can enrich the work of the Security Council,” he said at the 77th session of the United Nations General Assembly.

“To this end, I appeal for the valuable support of all UN Member States for the Philippines’ candidature to the Security Council for the term 2027-2028,” Marcos added.

The Security Council’s primary responsibility is to maintain international peace and security. The body has 15 members and each member has one vote.

Under the UN Charter, all member states are obligated to comply with Council decisions.

It was in January 2004 when the Philippines last assumed one of the seats in the UN Security Council for the term 2004-2005.

In January 2004, the Philippines assumed one of the elected seats in the UN Security Council for the term 2004-2005.