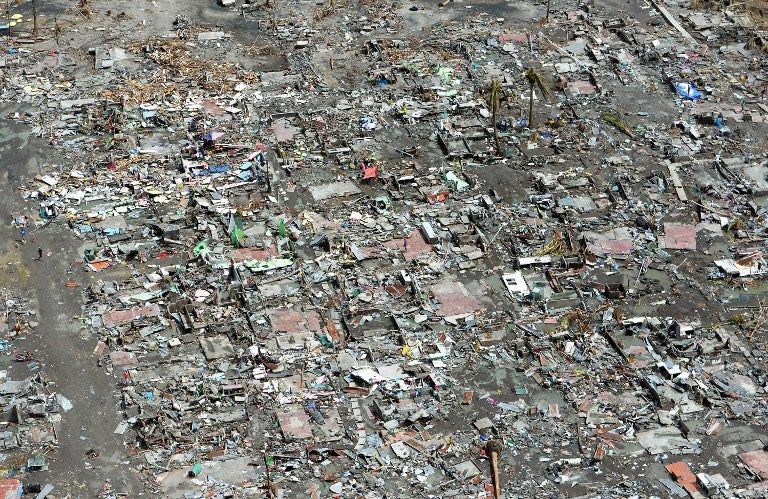 This file photo taken on Nov. 11, 2013, shows flattened houses in Tacloban City, Leyte province, days after Super Typhoon Haiyan devastated the town on Nov. 8, 2013. The impacts of Typhoon Haiyan were more extreme because of climate change, according to the World Meteorological Organisation. (File photo from the Agence France-Presse)

NEW YORK CITY — Addressing the 77th session of the United Nations General Assembly on Tuesday (Wednesday Manila time), President Ferdinand “Bongbong” Marcos Jr. called on all nations to take their share of responsibility in fighting the effects of climate change.

In his statement at the UN high-level debate, Marcos said the effects of climate change, which he described as the “greatest threat” affecting all countries and people, were “uneven and reflect a historical injustice.”

“Those who are least responsible suffer the most. This injustice must be corrected, and those who need to do more must act now,” he said. “We accept our share of responsibility and will continue to do our part to avert this collective disaster,” he said.

Marcos said fighting climate change would require a “united effort,” and he called on industrialized countries to do their part in mitigating the environmental crisis.

“This threat knows no borders, no social class, nor any geopolitical consideration. How we address it will be the true test of our time,” he said.

The President lamented the inaction of industrialized countries on mitigating climate change when countries like the Philippines, which is among those that suffer the effects the most, accept their share of responsibility and will do their part to avert climate change.

Industrialized countries, he said, must step up.

“We call on the industrialized countries to immediately fulfill their obligations under the United Nations Framework Convention on Climate Change and the Paris Agreement to cut their greenhouse gas emissions, provide climate financing and technology transfer for adaptation for the most vulnerable and developing countries to lead by example,” Marcos said.

He said the world should not let the future generation suffer from the effects of climate change and he was looking forward to concrete outcomes at the Conference of Parties in Egypt later this year.

“When future generations look back, let them not ask why we did not take this opportunity to turn the tide, why did we continue in our profligate ways, until it was too late?” he said.

Marcos was the first Southeast Asian leader to take the podium during the general debate. He was the second speaker in the afternoon session of the General Assembly.

Aside from the UN General Assembly, the President is in New York to meet some leaders and attract investors to achieve his goal of economic transformation.