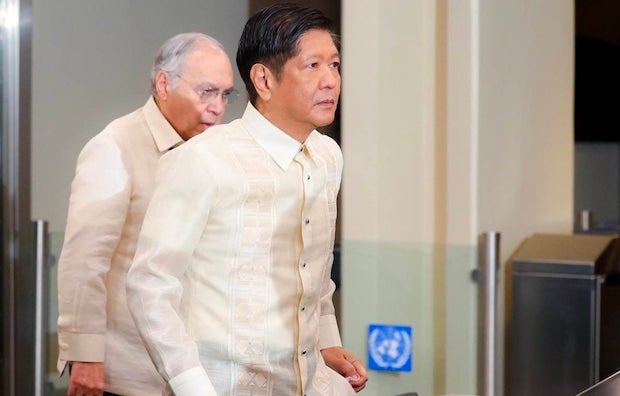 NEW YORK CITY — The Philippines will retain its “friendly” foreign policy, President Ferdinand Marcos Jr. said in his world debut at the 77th session of the United Nations General Assembly on Tuesday (Wednesday in Manila).

In his address at the UN high-level debate, Marcos reiterated that disputes should only be resolved through peaceful means, reason, and right, citing the 1982 United Nations Convention on the Law of the Sea.

He also cited the Manila Declaration of 1982, which is a landmark instrument for the peaceful settlement of international disputes.

“By reinforcing the predictability and stability of international law, particularly the 1982 UNCLOS, we provided an example of how states should resolve their differences: through reason and through right,” he said.

Marcos said these two landmark declarations provide useful guidance for all countries, an “important ballast” that stabilizes the situation.

“That is our open, inclusive, and rules-based international order that is governed by international law and informed by the principles of equity and of justice. The Philippines shall continue to be a friend to all and an enemy of none,” the President said.

He also called on nations to uphold UN ideals, especially since Asia’s “hard-won peace and stability” is currently under threat by increasing strategic and ideological tensions.

Inequalities and inequities within and among countries, Marcos said, also continue to persist, and “they continue to demand urgent action.”

Marcos was the first Southeast Asian leader to take the podium during the general debate. He was the second speaker in the afternoon session of the General Assembly.

Aside from the UN General Assembly, the President is in New York to meet some leaders and attract investors to achieve his goal of economic transformation.