Arroyo underscores importance of PH-China relations in meeting with Xi 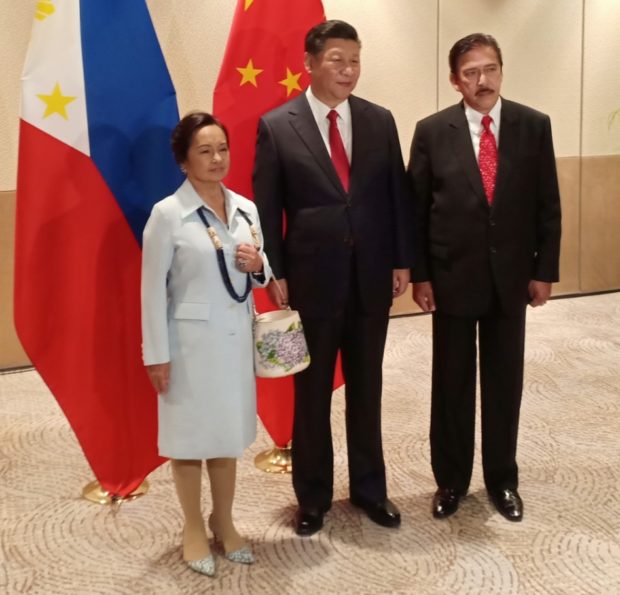 House Speaker Gloria Macapagal-Arroyo cited the importance of the relationship between China and the Philippines as Congress leaders meet Chinese President Xi Jinping in Taguig City on Wednesday.

“The relationship between China and the Philippines is very important for our countries. One reason is geography. Good relations between neighbors is always a priority,” she said during the bilateral meeting of the House of Representatives and Senate with Xi at around 11 a.m. at Shangri-La at the For in Bonifacio Global City.

The Pampanga representative noted the “vibrant Filipino-Chinese community” in the Philippines and China’s capability in infrastructure, which she said, “will be very important for the Philippines in the coming years.”

The former President also said the House supports and applauds Xi and President Rodrigo Duterte’s approach for “a strategic and comprehensive relationship.”

Xi departed for Beijing from the Ninoy Aquino International Airport around 1:30 p.m. His visit, which was the first from a seating Chinese President in 13 years, began on Monday.

Xi and Duterte witnessed the signing of 29 agreements between the two nations that are locked in a territorial dispute in the West Philippine Sea (WPS).

In July 2016, the Permanent Court of Arbitration in The Hague ruled Beijing’s claim to almost the entire WPS as invalid. But Duterte has chosen to set aside the historic ruling and engaged China in bilateral talks. /ee