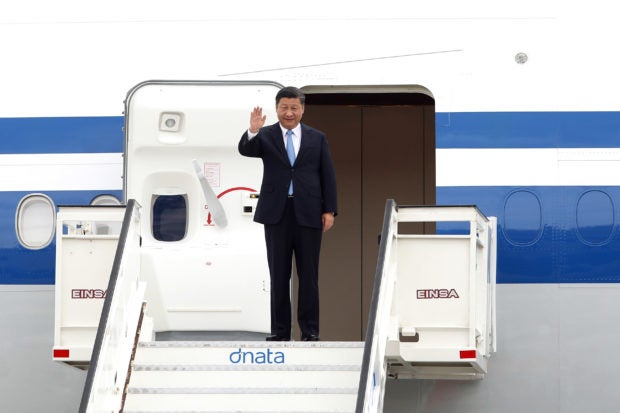 Xi departed for Beijing from the Ninoy Aquino International Airport around 1:30 p.m. His Manila visit was the first from a seating Chinese President in 13 years.

In the first day of his visit, Xi led a wreath-laying ceremony at the Rizal Monument in Luneta on Tuesday afternoon, just hours after he landed in Manila. He then proceed to Malacañang where he was welcomed by President Rodrigo Duterte, presidential daughter and Davao City Mayor Sara Duterte-Carpio and other members of the Cabinet.

Xi and Duterte witnessed the signing of 29 agreements between the Philippines and China, two nations that are locked in a territorial dispute in the West Philippine Sea.

Among the signed agreements was the memorandum of understanding on Cooperation on Oil and Gas Development.

Before leaving the country, the Chinese leader met with House Speaker Gloria Arroyo and Senate President Vicente Sotto III at Shangri-la Hotel-Bonifacio Global City in Taguig. He also met with leaders of the Filipino-Chinese Community here.

The Philippines’ relations with China festered over the territorial rifts in the South China Sea until Duterte took office in 2016 and rebuilt ties with Asia’s largest economy.

China claims nearly the entire South China Sea, including key portions of the West Philippine Sea, but the Permanent Court of Arbitration in The Hague invalidated this in 2016. China, however, has refused to recognize the sea ruling.

Duterte has chosen to set aside the ruling and engaged China in bilateral talks. His rapprochement has fostered a new era of warming ties with China. /kga