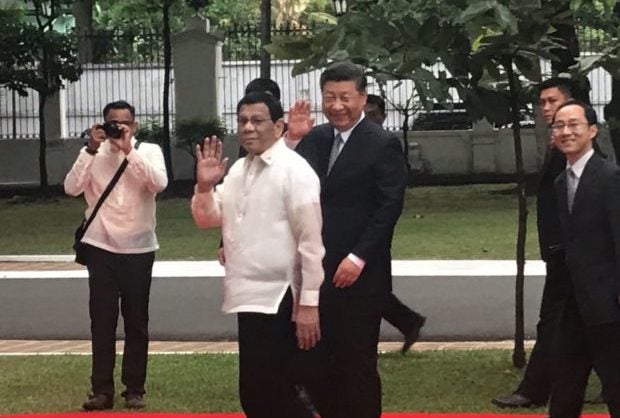 President Rodrigo Duterte and Chinese President Xi Jinping wave to members of the media following the arrival honors for the Chinese leader, who is on a two-day state visit to the Philippines. (Photo by DARRYL JOHN ESGUERRA / AP)

President Rodrigo Duterte on Tuesday expressed optimism that the warming ties between the Philippines and China would continue to flourish even further.

“I stand here optimistic that we will sustain the momentum in moving our relationship even further, and that the friendship between our countries will continue to flourish in the years to come,” Duterte said in his toast at the state banquet hosted for visiting Chinese President Xi Jinping in Malacañang.

Duterte said he was hoping that “opportunities for greater collaboration will further promote the prosperity and success” of the two nations, which are both locked in a territorial dispute in the West Philippine Sea.

China’s expansive claim includes portions of the West Philippine Sea, but the Permanent Court of Arbitration invalidated it in July 2016, favoring the Philippines’ claims in the area.

China has refused to recognize the ruling.

Duterte, meanwhile , has chosen to set aside the ruling and engaged Asia’s largest economy in bilateral talks.

Xi is in Manila for a two-day visit which will end on Wednesday after meeting members of the Filipino-Chinese community here.

Earlier, the two leaders witnessed the signing of 29 bilateral agreements, which include a memorandum of agreement on oil and gas exploration deal. /atm