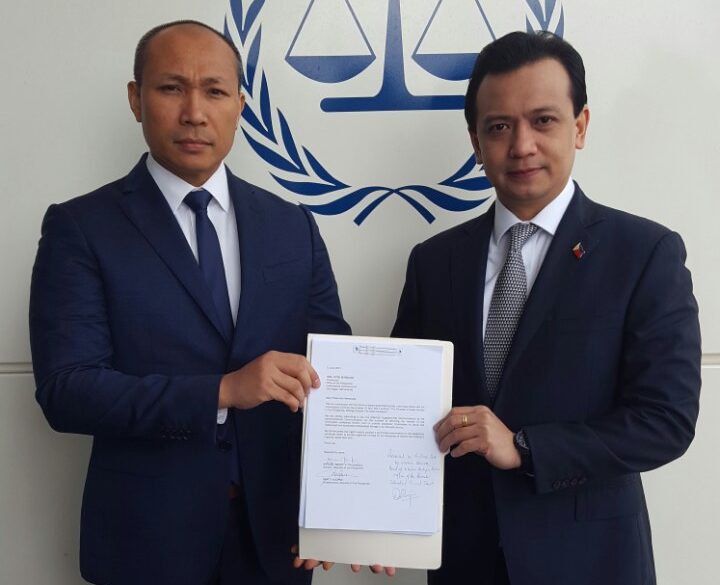 Senator Antonio Trillanes IV and Magdalo partylist Representative Gary Alejano on Tuesday filed a supplemental communication with the International Criminal Court (ICC) in The Hague, saying it was time for the international tribunal to step in and investigate President Duterte in his bloody campaign against illegal drugs after government has shown no interest to make the Chief Executive accountable for his alleged crimes against humanity.

“It is now for the Office of the Prosecutor to take cognizance of this case and render justice to the thousands of victims in the Philippines… We respectfully submit that there is an urgency to conduct a preliminary examination on the allegations propounded herein in order to pre-empt and prevent further commission of crimes against humanity in the Philippines,” the opposition lawmakers said.

The 45-page Trillanes-Alejano ICC communication said the “State is unwilling to even investigate the extrajudicial killings in the country and because of the President’s immunity, unable to prosecute President Duterte.”

They cited the swift junking by the House of Representatives of the impeachment complaint that Alejano filed against Mr. Duterte.

“Unfortunately, this mode of making President Duterte accountable to the crimes he is accused of doing is no longer available since the first impeachment complaint filed against him was already junked last May 15,” the Trillanes-Alejano complaint said.

The lawmakers also mentioned the equally prompt termination by the Senate Committee on Public Order and Dangerous Drugs of the proceedings looking into the Davao Death Squad allegedly led by the President when he was Davao City mayor.

Article 17 of the Rome Statute of the ICC provides that the international tribunal can consider the admissibility of a case if a State is unwilling or unable to carry out an investigation.

It defines “unwillingness” of a State when “the proceedings were or are being undertaken or the national decision was made for the purpose of shielding the person concerned from criminal responsibility for crimes within the jurisdiction of the Court.”

A State is “unable” to investigate when its legal system has collapsed.

Trillanes and Alejano’s filing comes almost a month after lawyer Jude Josue Sabio asked the ICC to charge Mr. Duterte and 11 other politicians and government officials with mass murder and crimes against humanity for the thousands of deaths that have resulted from the administration’s brutal campaign against illegal drugs.

“It must be emphasized that hardly one month after the communication from the Philippines was filed, the killings in the Philippines continued, and no genuine effort can be seen from the government to abate or at least investigate these killings, thus, proving in fact that the killings are a national policy of President Duterte and, therefore, state-sponsored,” the Trillanes-Alejano ICC complaint said.

In addition to President Duterte and the 11 government officials accused by Sabio, the Trillanes-Alejano complaint named 11 police officials who the lawmakers alleged were complicit in the state-sponsored killing of drug suspects.

The inclusion of the police officials was based on news reports and the affidavit of PO1 Vincent Tacorda of the Catanduanes police force.

Tacorda is possibly the first police officer to put on record that his superiors gave orders after Mr. Duterte’s assumption to office in June last year to ensure that drug suspects were killed as part of their “accomplishment report.”

Tacorda said Martirez, the Catanduanes police provincial director, ordered him and another policeman to “personally deliver an ‘accomplishment of 5-10 deaths of drug personalities.’”

Tacorda said Martirez admitted to him and his fellow policeman that “he will be relieved from his post if there is no ‘death of drug personalities’ that will be delivered in his area.”

“This testimony of PO1 Tacorda lends credence to other testimonies made by police assets (like Edgar Matobato) and former police officers (like Arthur Lascañas) who testified that the killings of drug personalities are targeted, planned and executed by the police,” the Trillanes-Alejano complaint said.

Coronel, on the other hand, was included in the complaint because of his denial that the Manila police force have not been involved in any human rights violations, saying that the fatalities in his area were drug suspects who fought the police.

“This, however, is contrary to police and media reports, which recorded that of the 2,555 killed by the time the drug war was suspended in January 2017, 45 were killed in the area of Tondo, with at least 11 drug-related fatalities after police encounters in Delpan alone,” the complaint said. The drug war resumed a month later.

The supplemental communication included verbatim quotes of President Duterte’s statements made in his public speeches, wherein the chief executive gave “shoot to kill” orders which has become his “national policy for killing drug suspects.”

It also enumerated 25 incidents of killings from April to May, to illustrate that even after Sabio filed his complaint on April 24, the Duterte administration’s bloody campaign against illegal drugs continued. JE/rga