Duterte, 11 others accused of crimes against humanity before ICC | Global News

Duterte, 11 others accused of crimes against humanity before ICC 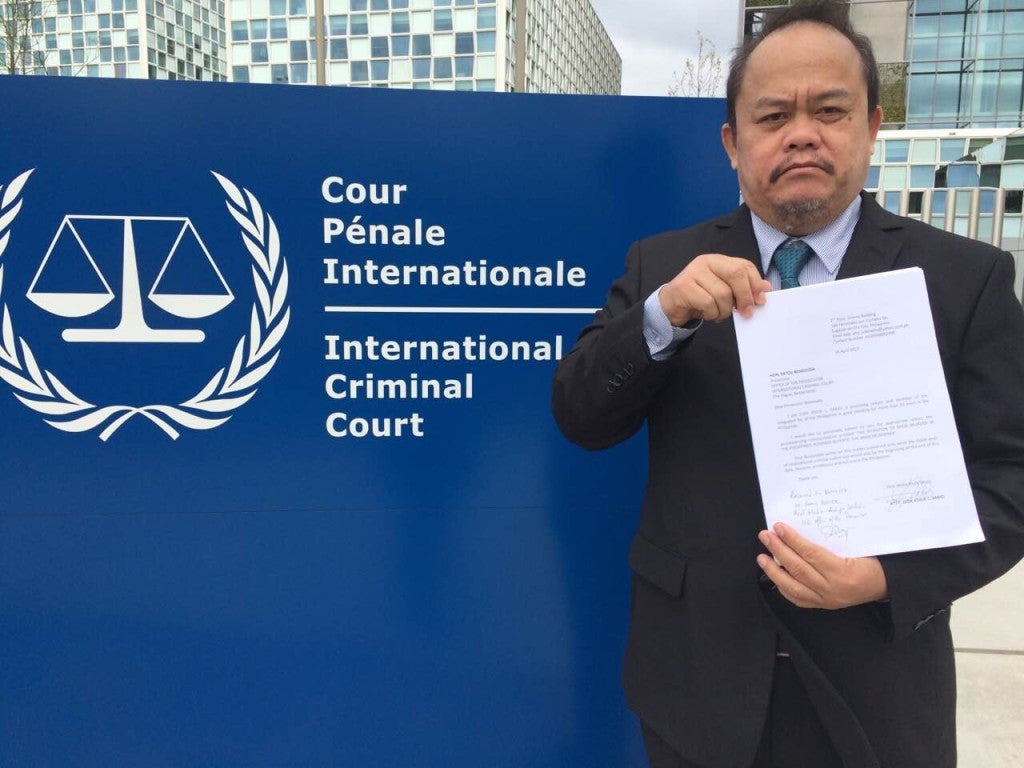 Lawyer Jude Sabio, counsel of self-confessed DDS hitman Edgar Matobato, holds up a received copy of his 77-page complaint against President Duterte and 11 others filed at the International Criminal Court in The Hague, alleging that Mr Duterte et al have committed crimes against humanity in the government’s war against criminality and illegal drugs. CONTRIBUTED PHOTO

The lawyer of self-confessed Davao Death Squad hit man Edgar Matobato on Monday filed a complaint before the International Criminal Court (ICC) in The Hague against President Duterte and 11 of his loyal allies for committing crimes against humanity.

In his 77-page complaint, lawyer Jude Josue Sabio cited the “continuing mass murder” in the Philippines as shown by the thousands of Filipinos killed in Duterte’s severe anti-criminality and anti-drug campaigns that began when he was still mayor of Davao City and continued now that he is the country’s chief executive.

“Your favorable action on this matter would not only serve the noble ends of international criminal justice, but would also be the beginning of the end of this dark, obscene, murderous and evil era in the Philippines.”

It is the first time in the country’s history that a President has been accused of committing crimes against humanity.

From the time he was mayor until he became President, Mr. Duterte has been “repeatedly, unchangingly, and continuously” committed mass murders “constituting crimes against humanity through murder, Sabio said in his complaint.

“Crimes against humanity are crimes of universal jurisdiction, but where a State like the Philippines fails to assume such universal jurisdiction for crimes against humanity continuously being committed in its very own territory, then the International Criminal Court will have to intervene into a situation that is grave by any human standard,” Sabio said.

“The impunity is grave, as shown by the ‘repeated, unchanging and continuing’ extra-judicial or summary executions, with unrelenting impunity, ever since the time that President Duterte was still Mayor of Davao City claiming 1,400 deaths, more or less, under his Davao Death Squad and later on in the national level in the war on drugs after 30 June 2016 waged by the very same person, no less than President Duterte, who formed, created, managed, headed and masterminded the Davao Death Squad in Davao City when he was still a Mayor.

“To end this impunity, the International Criminal Court is being resorted to as a court of last resort, given the gravity of the current human rights disaster in the Philippines,” Sabio said.

READ: Duterte: I am ready to face ICC, impeachment 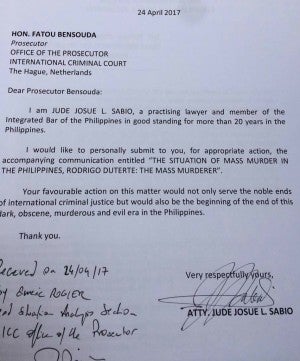 The complaint against President Duterte and 11 others filed by lawyer Jude Sabio, counsel of self confessed Davao Death Squad hitman Edgar Matobato, is received by the International Criminal Court (ICC) Office of the Prosecutor in The Hague. CONTRIBUTED PHOTO

Sabio said any investigation under the current administration would be futile because those in government with the legal mandate to do so cannot be expected to do their jobs because of a reason “so simple to see.”

Most of the President’s men “have announced in public their full support” for his war on drugs and “defended the extra-judicial or summary executions as part of legitimate police drug operations,” Sabio said.

Aside from Mr. Duterte, the following are included in the complaint for allegedly aiding and abetting the mass murder taking place in the Philippines, naming two police superintendents who have supposedly been tasked by President Duterte to handle the death squad operations in the war against drugs nationwide:

·      Justice Secretary Vitaliano Aguirre- a law school classmate of Mr. Duterte, Aguirre has been quoted as saying that drug addicts have no human rights because they are not human in support of the government’s anti-illegal drugs campaign. Aguirre was also the lawyer of Bienvenido Laud, the owner of the quarry where the victims of the Davao Death Squad were said to be buried.

·      Supt. Edilberto Leonardo- now with the Manila Police District and used to be with the Davao Regional Police. Leonardo reportedly helped “design and operate the reward system” the Duterte administrations war against drugs.

·      Supt. Royina Garma- for violations in the implementation of Oplan Tokhang and for the killings in her area of responsibility as head of the PNP Criminal Investigation and Detection Group (CIDG) in Region 7.

·      House Speaker Pantaleon Alvarez- for his statements that “clearly incite violence and mass murder, or further in a certain way the criminal purpose of President Duterte.”

·      Former Interior and Local Government Sec. Ismael Sueno- for allowing the police and village captains who were under his administrative control to implement Oplan Tokhang “which led to the discrimination and vilification of those identified as drug users and dealers, and their eventual murder, persecution, mental torture, and incarceration.”

·      SPO4 Sanson “Sonny” Buenaventura – for handing out the reward money to the DDS hitmen and for his direct involvement in the death squad.

·      National Bureau of Investigation Director Dante Gierran- for failing to investigate the “widespread and systematic” killings under the administration, thus facilitating the continued commission of the crime.

·      Solicitor General Jose Calida – for promising to defend policemen accused of summary killings “if the killings are committed as part of the war on drugs.”

·      Senator Richard Gordon – for concluding that the extrajudicial killings by the PNP in the campaign against drugs were not state-sponsored, as the Senate chair of the Committee on Justice and Human Rights and sponsor of the Senate Committee Report No. 18.

·      Senator Alan Peter Cayetano – for “aiding and abetting the killings brought by the war on drugs through his speeches and public pronouncements… denying the extra judicial killings and encouraging” President Duterte’s war on drugs.

In his complaint, Sabio said there was “sufficient factual and legal basis” for Bensouda’s office to confirm with the ICC Pre-Trial Chamber that there is enough evidence to place President Duterte and his senior administration officials under trial for committing crimes against humanity.

The judges of the Pre-Trial Chamber can order the arrest of Mr. Duterte and all those named in the complaint if they find there are reasonable grounds that they have committed crimes within the ICC jurisdiction. KS/rga