‘War on drugs does not work’—UN expert 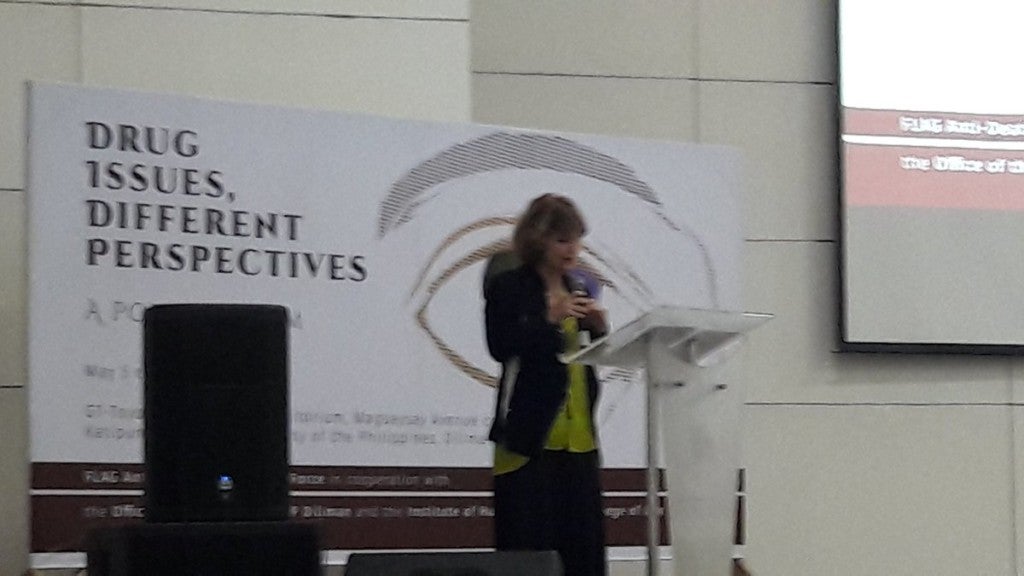 “The war on drugs doesn’t work.”

Dr. Agnes Callamard, the United Nations Special Rapporteur on extrajudicial summary or arbitrary execution, said this Friday in her opening speech as she attended a drug policy forum at the University of the Philippines Diliman.

Callamard arrived in the country in what was described by Malacañang as an affront to its protocol of being informed of her arrival. Callamard has been critical of the administration’s brutal war on drugs.

Callamard has crossed swords with President Rodrigo Duterte, who demanded that she could conduct an investigation into the administration’s human rights record only if she would agree to have a public debate with him.

In her opening speech, Callamard said that waging a war on drugs will not solve the problem, but only makes matters worse with compound problems such as torture, violence, and a spate of extrajudicial killings.

Callamard said the experience of other governments’ war on drugs has only bred violence through escalated  or “compound problems” such as “killings extrajudicial or by criminal gangs; the break-down of the rule of law; vigilante crimes; torture, ill-treatment and sexual violence; prolonged pre-trial detention; mandatory sentencing and disproportionately long sentences for drug possession; detention in drug and rehabilitation centers without trial or a proper evaluation of drug dependency; and non-consensual experimental treatment.”

Callamard said the UN’s General Assembly in April 2016 recognized that “explicitly… the ‘war on drugs’ – be it community based, national or global – does not work.”

“And further, that many harms associated with drugs are not caused by drugs, but by the negative impacts of badly thought out drug policies,” Callamard said.

Callamard said the governments committed to the “importance of systematic data collection, evidence gathering, scientific research and the sharing of information including the exchange of best practices related to preventing and countering drug-related crime.”

On the contrary, the governments did not commit to the approach of waging a brutal war on drugs, instead placing emphasis on looking at the drug situation as a health problem, Callamard said.

“What governments did not commit to last year was ‘the war on drugs’ approach. Quite to the contrary. They called for what amounts to a balanced, multi-faceted, multi-disciplinary approach, and they placed great emphasis on health, rights, and justice,” Callamard said.

The governments did not even suggest death penalty, “instead, they spoke about proportionate sentencing and alternative punishments,” she added.

Callamard said the joint commitment was to apply “evidence-based, scientific ways, of combating drug abuse and trafficking – ways that do not make matters worse.”

Callamard said “badly thought out, ill-conceived drug policies can foster a regime of impunity infecting the whole justice sector and reaching into whole societies, invigorating the rule of violence rather than of law; eroding public trust in public institutions; breeding fear and leading people to despair.”

Callamard said the experience the world over was that because of badly thought drug policies to stamp out the drug menace, the opposite happened.

“These are the findings from research undertaken around the world. Let me be clear. In none of the countries where the perverse consequences of ill-thought out drug policies were reported, in none of these countries did the drug problem disappear. In fact, the opposite happened,” Callamard said.

Callamard has been critical of the administration’s brutal war on drugs, which reportedly claimed over 7,000 lives. The Philippine National Police, however, has said that only over 2,600 deaths of drug pushers and users could be attributed to the intensified narcotics crackdown. IDL/rga

Duterte to drug war critics, UN: You do not reprimand me in public

UN rights expert: Stop EJKs instead of toning down reports