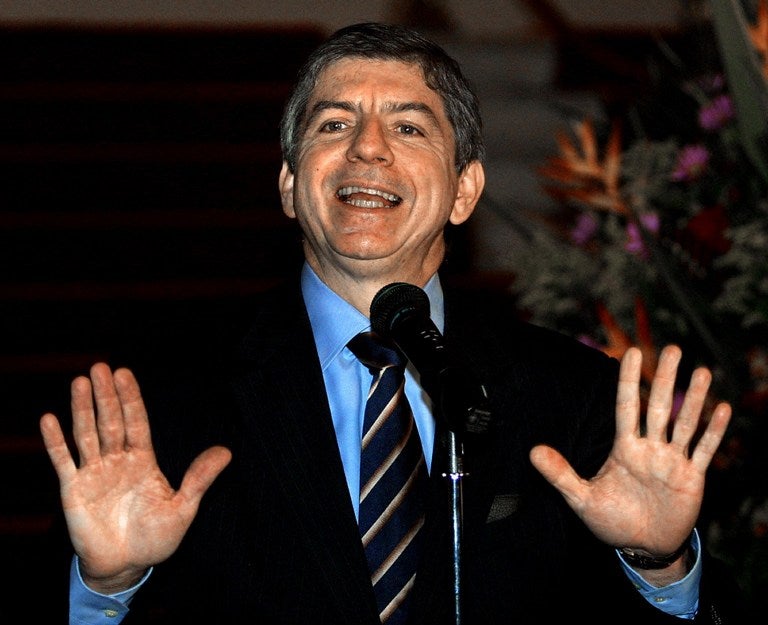 Former Colombian President Cesar Gaviria, talks to journalists in this Jan. 2004 photo. In an opinion piece published in the New York Times on Feb. 7, 2017, Gaviria urged President Rodrigo Duterte to avoid the mistakes he made when he waged a ‘heavy-handed’ war on drugs in Colombia. AFP FILE

A former president of Colombia, who also waged a drug war in his country, has a message to President Rodrigo Duterte: The drug menace cannot be solved by the “heavy-handed” approach of killing drug addicts.

In an opinion piece published in the New York Times on Wednesday, César Gaviria said he was hoping that Duterte would not commit the same mistakes that he did in dealing with Colombia’s drug problem.

“Illegal drugs are a matter of national security, but the war against them cannot be won by armed forces and law enforcement agencies alone,” Gaviria wrote.

He added, “Throwing more soldiers and police at the drug users is not just a waste of money but also can actually make the problem worse. Locking up nonviolent offenders and drug users almost always backfires, instead strengthening organized crime.”

“That is the message I would like to send to the world and, especially, to President Rodrigo Duterte of the Philippines. Trust me, I learned the hard way,” he added.

Gaviria admitted that his administration’s iron-fist approach failed to eradicate drug production and consumption and even resulted in new problems.

“This heavy-handed approach to drugs did little to diminish the drug supply and demand in Colombia, much less in markets like Western Europe and the United States,” said Gaviria, who waged a war on drugs from 1990 to 1994.

He stressed, “The war on drugs is essentially a war on people.”

Instead of focusing on law enforcement, Gaviria said the best way to tackle the drug problem was to improve public health and safety policies and to decriminalize drug consumption.

“While the Filipino government has a duty to provide for the security of its people, there is a real risk that a heavy-handed approach will do more harm than good,” he warned.

“There is no doubt that tough penalties are necessary to deter organized crime. But extrajudicial killings and vigilantism are the wrong ways to go,” he said.

“Winning the fight against drugs requires addressing not just crime, but also public health, human rights and economic development. No matter what Mr. Duterte believes, there will always be drugs and drug users in the Philippines. But it is important to put the problem in perspective: The Philippines already has a low number of regular drug users. The application of severe penalties and extrajudicial violence against drug consumers makes it almost impossible for people with drug addiction problems to find treatment,” Gaviria added.

The former Colombian leader told Duterte that the war on drugs was unwinnable but noted that positive impacts could be made if it would be designated as a social problem and not a military one.

“A successful president makes decisions that strengthen the public good. This means investing in solutions that meet the basic standards of basic rights and minimize unnecessary pain and suffering. The fight against drugs is no exception,” Gaviria said.

He however added, “So, too, are measures that decriminalize drug users, support alternative sentencing for low-level nonviolent offenders and provide a range of treatment options for drug abusers. This is a test that many of my Colombian compatriots have failed. I hope Mr. Duterte does not fall into the same trap,” he added.

The Duterte government’s antinarcotics campaign has claimed about 2,500 lives in police operations, while another 3,500 to 4,000 have been classified as deaths under investigation. CBB