Duterte: I’m no puppet of any country

President reacts to comments he was sparking distress around the world
By: Nestor Corrales - Reporter / @NCorralesINQ
INQUIRER.net / 07:03 PM October 25, 2016 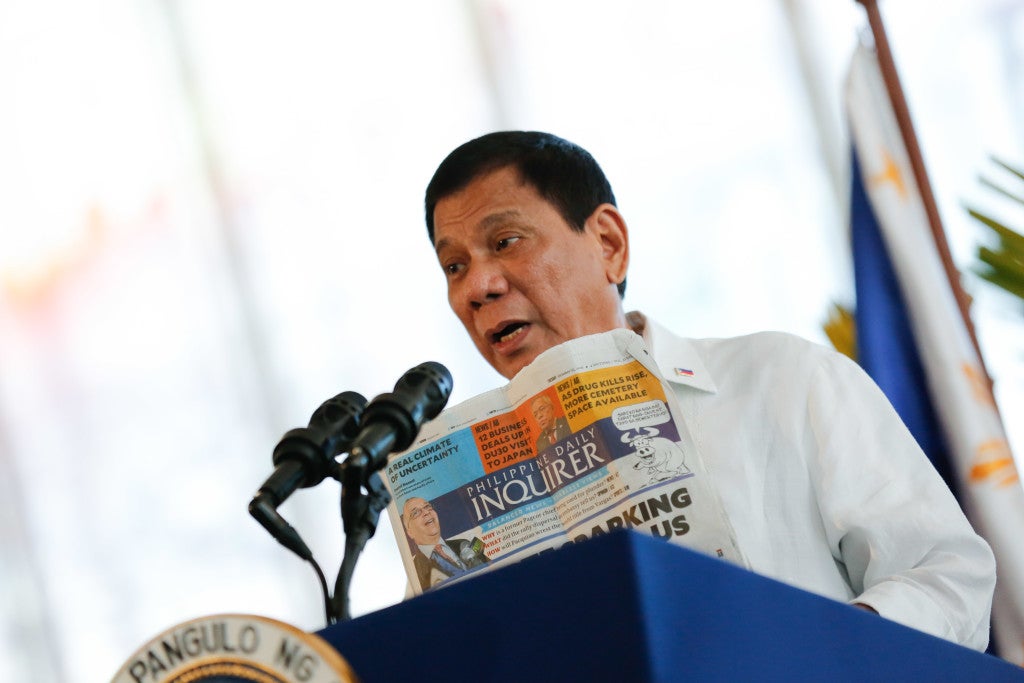 President Rodrigo Duterte lambasts an Inquirer report accusing him of “sparking international distress” during a press briefing at the Ninoy Aquino International Airport Terminal 2 prior to his departure for Japan for an official visit on Oct. 25. CONTRIBUTED PHOTO

Following remarks that his pronouncements were causing distress around the world, President Rodrigo Duterte assailed the United States anew as he reiterated his plan to chart an independent foreign policy for the Philippines.

“I am not a puppet of any country,” said the President on Tuesday in his departure speech at the Ninoy Aquino International Airport Terminal 2 before leaving for an official visit to Japan.

Duterte blasted the United States, particularly Assistant Secretary of State for East Asian and Pacific Affairs Daniel Russel, for asking Foreign Affairs Secretary Perfecto Yasay to tell him to “tone down your rhetoric against America.”

Russel arrived in Manila on Sunday to clarify the President’s statement that he was cutting military and economic ties with the US.

On Monday, Russel said Duterte’s controversial remarks had sparked distress around the world.

READ: US: Duterte sparking distress around the world

Duterte took notice of this as he showed his audience the banner story of today’s Inquirer, whose headline said Duterte was causing international distress according to the US.

During his speech, the President assailed the US, saying it was them who started the word war.

“Ang nag-una sila. Remember ang puno’t dulo nito ano? Iyong eleksyon, I made a comment in narration of an actual event which happened in Davao and which was covered by all media outlets there, tapos the ambassador said something not very nice,” he said.

Duterte was referring to the comments of outgoing US Ambassador Philip Goldberg on his rape remarks during the campaign period. The President has repeatedly mentioned this in his public speeches, saying Goldberg should not have intervened in the country’s elections.

“You know, before we can move forward, Mr. America, there are things, so many things. The massacre of the Filipino people before, these are historical hurts that would never go away, depende na lang kung maka-presidente ang Pilipinas ng tuta ninyo. You count me out,” he said.

“I’m not one of them. I am not also a tuta of any country. Mind you, only ang puwede lang mag-tuta sa akin ang Pilipino, period. Walang iba,” he added.

‘Nobody wins betting against US’