US: Duterte sparking distress around the world

America’s top diplomat for Asia on Monday said President Duterte’s controversial remarks and a “real climate of uncertainty” about his administration’s intentions have sparked distress around the world.

Russel’s visit to the Philippines, part of a three-nation trip to Southeast Asia, comes amid increasing uncertainty about Washington’s treaty alliance with Manila.

The firebrand Mr. Duterte, who took office on June 30, has displayed antagonism toward America, declaring his desire to scale back military engagements with the United States and telling US President Barack Obama to “go to hell.”

The Duterte administration, however, has not formalized his public declarations to remove US counterterrorism forces from Mindanao and stop large-scale joint exercises involving American forces, creating confusion among even his Cabinet officials.

Mr. Duterte sparked diplomatic alarm when he announced during a state visit to Beijing last week his “separation” from the United States and realignment with China.

Upon returning home the day after his stunning remarks, Mr. Duterte said he did not mean he was severing diplomatic ties with Washington but only wanted to end a foreign policy that was overly oriented toward the United States.

“I’ve pointed out to Secretary Yasay that the succession of controversial statements, comments and a real climate of uncertainty about the Philippines’ intentions has created consternation in a number of countries, not only in mine,” Russel told reporters on Monday in Manila after a meeting with Yasay that went overtime.

The unease, Russel said, was also palpable “not only among governments, but also … in other communities, in the expat Filipino community, in corporation boardrooms as well.”

Russel said that while the United States supported Mr. Duterte’s “effort against the scourge of drugs,” Washington was concerned over the loss of lives.

“This is not a positive trend,” he said, adding that the United States remains committed to continuing a solid alliance with and providing assistance to the Philippines, including in fighting the drug menace.

More than 3,700 drug suspects have been killed by police and mysterious assailants since Mr. Duterte launched a brutal campaign against drugs upon taking office on June 30.

Expressions of concern about the killings from the United States, United Nations, European Union and international human rights organizations have provoked sulphuric reactions from Mr. Duterte, who called them “fools” and “sons of bitches.”

His exhortations to police to kill suspects who will resist arrest have drawn a warning from the International Criminal Court that Philippine officials responsible for the killings could be prosecuted for crimes against humanity.

Russel said that while Washington welcomed the relaxation of tensions between Manila and Beijing under Mr. Duterte, the rapprochement should not come at the expense of the United States or other nations.

“It’s a mistake to think that improved relations between Manila and Beijing somehow come at the expense of the United States,” he said. “This should be addition and not subtraction.”

The outgoing American ambassador in Manila said Mr. Duterte’s anti-US rhetoric was “inconsistent” with the decades-old alliance between the Philippines and the United States. 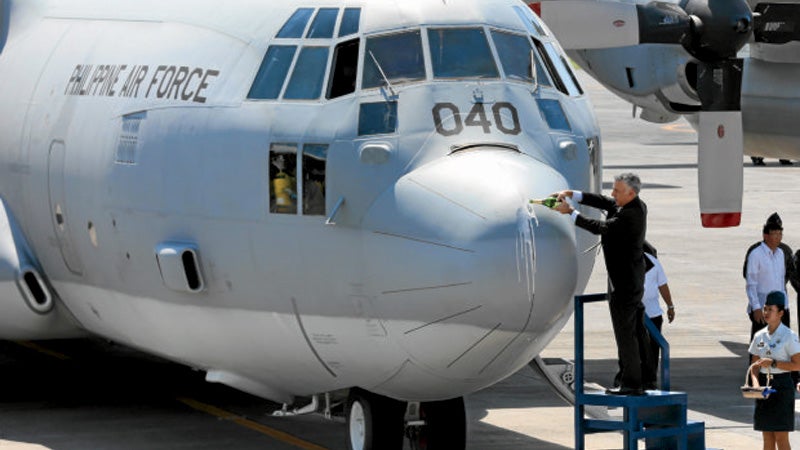 CHEERS US Ambassador to the Philippines Philip Goldberg pours champagne on a C-130 as he turns over the transport plane to the Philippine Air Force during ceremonies at Villamor Air Base in Pasay City on Monday. MARIANNE BERMUDEZ

“It’s clear that many of the things that have been said are inconsistent with friendship and alliance,” Philip Goldberg, whom Mr. Duterte has called “gay son of a bitch,” told reporters after the turnover of a C130-T military plane to the Philippine Air Force (PAF) at Villamor Air Base in Pasay City on Monday.

“We are trying to sort out exactly what that means in policy terms [and] in terms of our relationship. We’ve always treated the Philippines as an equal and as a sovereign country, that is why we are seeking clarification,” Goldberg said.

“On our part, we have a very strong sense that the Philippines is an ally, a friend. We have a strong commitment to its defense,” he said.

Goldberg said the US rebalance to Asia would proceed.

In his speech during the turnover ceremony, Goldberg lamented the “changes” that had happened since he last oversaw the turnover of a similar aircraft to the PAF six months ago.

“Quite a bit happened, quite a bit changed since then. But one thing hasn’t changed: that the United States’ commitment to the Philippines remains as strong as ever,” he said.

“The United States is a great friend of the Philippines [and] respects the democracy in the Philippines and the process that has happened to elect a new president and a new administration,” Goldberg said.

“Those are fundamental core beliefs of the United States and any statement that we would, in any way, be involved in such a thing is not right,” he added. —REPORTS FROM THE WIRES, MARLON RAMOS AND JOCELYN R. UY