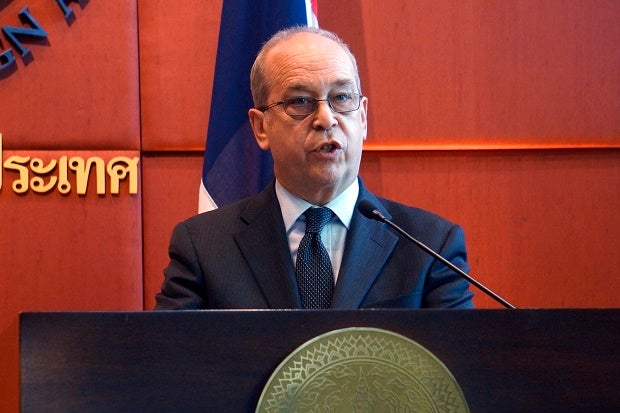 Philippine President Rodrigo Duterte’s fiery rhetoric and deadly crime war are becoming a growing concern around the world, the top US envoy for Asia warned on Monday in Manila.

US Assistant Secretary of State for East Asian and Pacific Affairs Daniel Russel met with the Philippines’ defense and foreign ministers on Monday, after Duterte last week announced his nation’s “separation” from the United States.

Duterte quickly walked back from the statement, saying he did not plan to sever the nations’ seven-decade alliance, but Russel signalled many people around the world were becoming increasingly worried about the Filipino President’s repeated tirades.

“The succession of controversial statements, comments and a real climate of uncertainty about the Philippines’ intentions have created consternation in a number of countries,” Russel said.

“Not only in mine and not only among governments, but also growing concern in other communities, in the expat Filipino community, in corporate boardrooms as well. This is not a positive trend.”

Russel said he also directly conveyed to Philippine Foreign Secretary Perfecto Yasay American concerns about Duterte’s war on crime, which has claimed about 3,700 lives in less than four months and raised fears about mass extrajudicial killings.

“I also reiterated the importance that we place and that others place on due process and respect for the rights of citizens as an important part of protecting our communities as well,” Russel said.

“And the growing uncertainty about this and other issues is bad for business as well.”

US Secretary of State John Kerry rang Yasay on Monday to discuss the alliance, Russel said.

Duterte has frequently voiced deep anger at American criticism of his efforts to eliminate drugs in society, repeatedly branding President Barack Obama as a “son of a whore” and telling him to “go to hell” for expressing concerns.

Duterte, who describes himself as a socialist, has sought to diminish his nation’s alliance with the United States in favor of closer ties with China and Russia.

Duterte’s “separation” remark was made during a four-day state visit to China.

“America has lost. I’ve realigned myself in your ideological flow and maybe I will also go to Russia to talk to (President Vladimir) Putin and tell him that there are three of us against the world: China, Philippines and Russia. It’s the only way,” Duterte said in Beijing.

Immediately upon returning to the Philippines, Duterte said he would not cut ties with the United States, but he nevertheless launched another profanity-laced critique.

“If there is one thing that America has failed miserably, it is in the province of the human dignity,” Duterte said on Saturday, as he signalled he did not care about the hundreds of millions dollars in foreign aid from the United States.

“Assistance, USAID, you can go to hell,” he said

Duterte has repeatedly said the Philippines has not benefited from its ties with the US, particularly denigrating their military alliance that is anchored on a 1951 mutual defense treaty.

The two nations typically hold more than two dozen war games of various sizes every year, but Duterte has said there will be no more.

He has also said he eventually he may no longer allow American troops on Filipino soil at all, and cancelled joint patrols in the South China Sea so as not to anger Beijing.

Nevertheless, the Philippines on Monday accepted a second-hand American C-130 transport plane at a handover ceremony in Manila.

“This will certainly boost our air transport facilities. The importance of this aircraft cannot be over-emphasised,” Defense Secretary Delfin Lorenzana said at the ceremony.

The plane was the second delivered this year under an agreement in which the Philippines buys surplus American military hardware./rga