‘Nobody wins betting against US’ 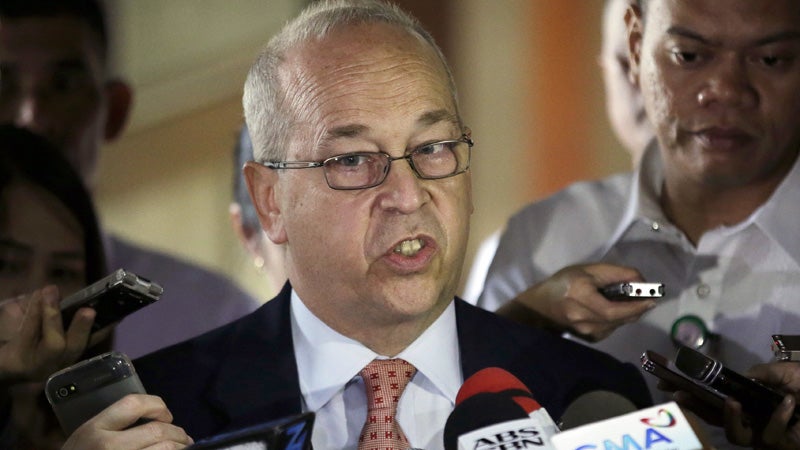 US Assistant Secretary of State for East Asian and Pacific Affair Daniel Russel issues his statement to reporters after meeting with Philippine officials at the Department of Foreign Affairs in suburban Pasay, south of Manila, Philippines on Monday, Oct. 24, 2016. AP File Photo

A senior US diplomat on Monday dismissed the notion that the Philippines’ abrupt pivot to China will put America at a disadvantage amid Washington’s efforts to rebalance in Asia.

Russel was sent by Washington to get a sense of what’s happening on the ground following a series of anti-US tirades made by Duterte that began by calling US Ambassador Philip Goldberg “gay son of a bitch” and threatening to pull the plugs on defense agreements and joint military exercises and patrols in South China Sea.

In Beijing, President Duterte announced that Manila will separate from Washington, failing to bring up contentious maritime issues with Chinese President Xi Jinping.

Asked about how Duterte-backed pivot to China would affect US’ rebalancing strategy in Asia, Russel, who is the second senior US official to visit the Philippines since President Duterte took office, indicated that Washington was downplaying Manila’s turn to Beijing.

“Well, I wouldn’t use the word pivot to describe the gradual improvement in the atmospherics between the Philippines and China, but whatever you call it, it’s a good thing,” Russel said in roundtable discussion with Filipino journalists.

“The tensions that have marked relations between the Philippines and China for some considerable time now even preceding the seizure of Scarborough Shoal have been a drive of tension and a real anxiety and risk in Southeast Asia,” he added.

Russel maintained that Washington views direct talks on South China Sea disputes between the Philippines and China as positive steps in achieving peace and stability in the region, noting that Beijing’s behavior towards other claimants of the sea has driven “tension and a real anxiety and risk.”

The Philippines, Malaysia, Brunei and Vietnam, all members of the Association of Southeast Asian Nations (Asean), have overlapping claims on South China Sea. Taiwan also lays claim to some features of the disputed sea.

“That’s a good thing and that could be an important step in the direction in the kind of regional stability and cooperation that certainly the United States and the Philippines would like to see,” he said.

With the Philippines turning to China, Russel dismissed views that good relations between the neighboring countries tilt the balance in favor of Beijing and would affect US relationship with Asia-Pacific countries.

“Don’t worry about it,” he said when a reporter tried to make a follow-up question after the media briefing.

“Nobody won. Nobody wins betting against the United States.” RAM