New batch of US troops already in Mindanao – military 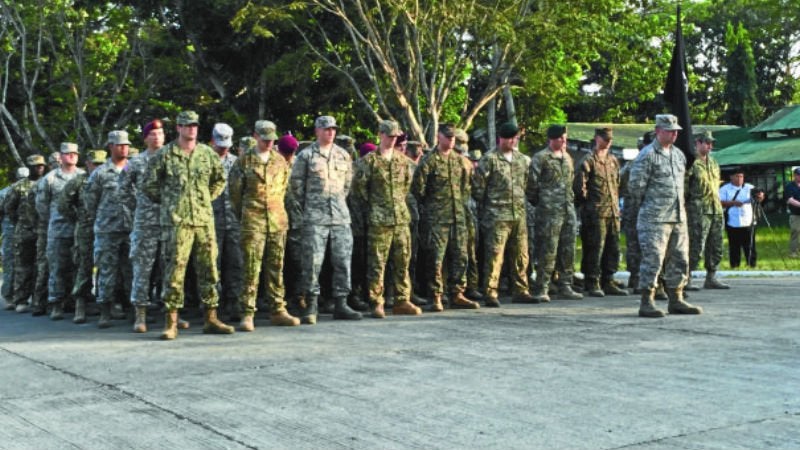 ZAMBOANGA MISSION: Some 50 US soldiers on formation witness the ceremonial folding of the flag of the Joint Special Operations Task Force Philippines at the Western Mindanao Command grandstand in Zamboanga City in this photo taken in February 2015. President Duterte has said American forces are magnets of terrorist attacks in Mindanao and should eventually leave. (JULIE ALIPALA/INQUIRER MINDANAO)

SUMISIP, Basilan – US troops are staying despite President Rodrigo Duterte’s pronouncement that they should go and leave Mindanao.

Lt. Gen. Mayoralgo dela Cruz, the Western Mindanao Command commander, said while it was true that some US soldiers left a few weeks ago, they were immediately replaced by new ones.

“These are normal rotations. Those who have left were US Marines and they were replaced by US Army soldiers. Definitely, the Marines will bring back their own equipment,” he said.

US forces are still present here and “there are 107 (of them),” according to Dela Cruz.

“All of them are still here,” he added.

The US troops maintain a small camp inside the Westmincom headquarters here and have been training their Filipino counterparts on such skills as humanitarian and medical evacuation, including mobile treatment of wounded soldiers.

Dela Cruz said there has been no directive for the pullout of US troops.

“If there is an order (for them) to withdraw, the first ones to know are those in Manila,” he said.

In September, Duterte said US special forces “have to go” because their presence have complicated things in Mindanao and the situation would just “get more tense” if they remained.

“They have to (leave) Mindanao. There are many (Americans) there,” he said.

“The statement reflects PRRD’s new direction towards coursing an independent foreign policy. He has made reference to the unrecognized, unrepented and un-atoned for massacre at Bud Dajo in Sulu by the Americans; hence our continued connection with West is the real reason for the ‘Islamic’ threat in Mindanao,” Communication Secretary Ernesto Abella said in a statement.

In October 2014, the Makabayan bloc filed a bill in Congress which sought the abrogation of the Visiting Forces Agreement, taking into account alleged violations made by US forces. These included the shooting of farmer Buyong-Buyong Isnijal in Tuburan, Basilan, in 2002, allegedly by American soldier Reggie Lane; the shooting of Arsid Baharon in Barangay San Roque in Zamboanga City on June 21, 2004 by an American soldier, who was never identified, among others.

Edgar Araojo, a political science professor at the Western Mindanao State University who was very vocal against the US presence in Zamboanga City, said since the presence of “US soldiers here is covered by Edca, their pull-out becomes circuitous, a legal circus.”

“If pullout is imminent, it won’t economically, militarily (have an) impact on Zamboanga City as (their) absence won’t be missed (at all). Life goes on, the Abu Sayyaf goes on, smuggling goes on,” Araojo said.

The presence of the US troops in Mindanao is covered by the Visiting Forces Agreement and the Enhanced Defense Cooperation Agreement (EDCA) that both the Philippines and the US have signed.  While President Duterte has announced his new foreign policy direction, he has not filed any formal notice with the US government to signify that he will soon enforce his statements.  SFM/rga