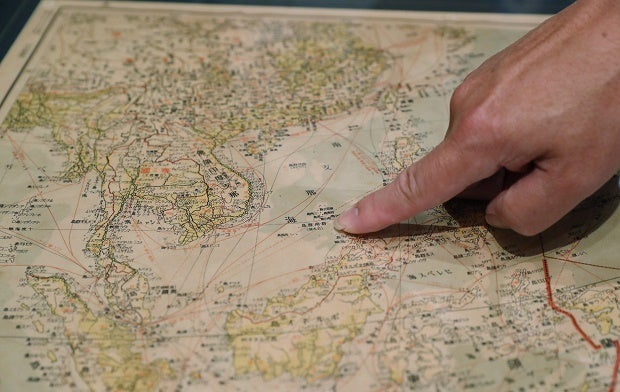 In this July 14, 2016 file photo, Marcopolo Tam, a member of a pro-China business group in Hong Kong, points to what is now known as the Spratly Islands in the South China Sea on a Japanese World War II era map purporting to support China’s claims to vast parts of the South China Sea, in Hong Kong. An international arbitration panel’s decision on the contested waters of the South China Sea so far is fueling regional tensions rather than tamping them down. In the ensuing 11 days, China has responded to the sweeping victory for the Philippines by flexing its military might. The Philippines faces pressure both at home and abroad not to cede an inch to China after the July 12 decision by a tribunal at The Hague-based Permanent Court of Arbitration. AP FILE PHOTO

It’s a ruling that China cannot accept, and one that the Philippines must.

An international arbitration panel’s decision on the contested waters of the South China Sea so far is fueling regional tensions rather than tamping them down.

In the ensuing 11 days, China has responded to the sweeping victory for the Philippines by flexing its military might. The Philippines faces pressure both at home and abroad not to cede an inch to China after the July 12 decision by a tribunal at The Hague-based Permanent Court of Arbitration.

The South China Sea is dotted with reefs and rocky outcroppings that several governments claim, including China and the Philippines. The arbitration panel didn’t take a position on who owns the disputed territories. It did conclude that many of them are legally rocks, even if they’ve been built into islands, and therefore do not include the rights to develop the surrounding waters. That and other findings invalidated much of what China’s called its historic claims to the resource-rich sea.

In order to ease tensions, China, the Philippines and possibly other claimants must define what the ruling means for fishing, offshore oil and gas exploration, and military and other activities in the vast body of water that lies between the southern Chinese coast and the Philippine archipelago.

A major diplomatic test starts Sunday in Laos at a three-day meeting of Southeast Asian foreign ministers that will include sessions with their Chinese and US counterparts. Past ASEAN meetings have broken down over disagreements between those taking China’s side and those opposing it. The US, whose Navy patrols the waters, has called on China to abide by the ruling while also urging calm.

Longer-term, there are compelling reasons for China and the Philippines to talk, but also significant obstacles to that happening. Unless the two sides can find a way around their impasse, the ruling may simply prolong the South China Sea’s long-running territorial disputes, which also involve Vietnam, Taiwan, Malaysia and Brunei in a mesh of overlapping claims.

In recent days, the military has staged live-firing exercises in the area and stated it would begin regular aerial patrols over the sea. It also has asserted that it will not be deterred from continuing construction of its man-made islands in the South China Sea.

In a veiled threat, a senior government official said that China has a right to declare an air defense identification zone over the area if its security is threatened. Under a so-called ADIZ, countries require that aircraft in the zone identify themselves and their routes and follow Chinese instructions. At least the US and Japan would almost certainly refuse to comply, creating new opportunities for confrontation.

While Beijing’s initial fury was widely foreseen, the controversy essentially disappeared from Chinese state media on Friday, a possible indication that China is preparing to tone it down.

The approach threatened to tarnish China’s global prestige by making it appear unwilling to play by the rules of international law. In particular, China’s relations with the 10-member Association of Southeast Asian Nations could suffer, further reducing its hopes of regaining its status as Asia’s dominant political and economic power.

Under such circumstances, Beijing might at least try to give the appearance of engagement on the issue. China is hosting the G20 meeting of major economies in September and doesn’t want the summit to turn into a “China-bashing fest,” said Yanmei Xie of the International Crisis Group think tank. However, it’s far from clear whether its neighbors will see any outreach from China as sincere. The Philippines already has turned down an offer for bilateral talks, saying China first must recognize the panel’s ruling.

The Philippines new president, Rodrigo Duterte, is on a tightrope.

The arbitration ruling was a huge legal victory, but also presents a dilemma to Duterte, who has made friendly overtures to Beijing.

On one side, he aspires to repair strained relations with the Asian economic powerhouse, which has offered to finance railway projects he had sought. On the other, any move that can be seen as a compromise on the ruling can provide ammunition to his political opponents. The Philippines wants the Chinese coast guard to stop harassing Filipino fishermen near reefs claimed by China, as well as to allow it to explore for desperately needed offshore oil and gas.

“The new government here in Manila is grappling with what might be called catastrophic success,” former Australian National Security Adviser Andrew Shearer said last week. “What comes next is obviously going to be a delicate balancing act.”

Philippine Foreign Secretary Perfecto Yasay Jr. has revealed that, during talks on the sidelines of a recent Asia-Europe meeting in Mongolia, his Chinese counterpart Wang Yi asked Manila to be open to bilateral negotiations “outside of and in disregard of the arbitral ruling.”

“This is something that I told him was not consistent with our constitution and our national interest,” Yasay said. Wang warned that if the Philippines insists on Chinese compliance with the ruling, “then we might be headed for a confrontation,” he said.

The meeting of ASEAN foreign ministers in Laos may signal whether the Philippines will stick with a low-key and non-confrontational approach despite its rejection of China’s condition for talks.

Had the decision been handed down during the time of Duterte’s predecessor, Benigno Aquino III, the government had planned to build pressure on China to comply by raising the issue in all international arenas, including the U.N. General Assembly, according to Filipino diplomats at the time.

“Duterte is staking his own political capital and engaging in a very risky diplomatic gambit by trying to extend the olive branch to China,” said Richard Heydarian, a Manila-based expert on the South China Sea issue. “He can’t just keep on extending the olive branch and not get anything in exchange. He would be lambasted at home and the opposition forces and his critics would use this to undermine him.”

Behind China’s vitriol, some analysts parsing the government’s words detect a possible softening of its stance. China has suggested it might be willing to have talks on joint development of resources, while setting aside the disputes over sovereignty.

The problem with that approach is the other claimants may no longer want to negotiate, because the tribunal essentially ruled that China does not have rights in much of the sea. So, at least on paper, the others now enjoy the sole right to develop within their 200-nautical mile (370-kilometer) exclusive economic zones.

“The Philippines now has no incentive to pursue joint development in areas inside its EEZ where it has been determined that China has no historical rights,” said Bonnie Glaser, senior adviser for Asia at the Center for Strategic and International Studies in Washington, D.C.

China could instead seek to deflect bad publicity by redoubling efforts toward negotiating a long-delayed code of conduct with the ASEAN countries governing their projects and activities in the region. That might help assuage members such as Vietnam and the Philippines that have long called for China to deal with ASEAN as a bloc.