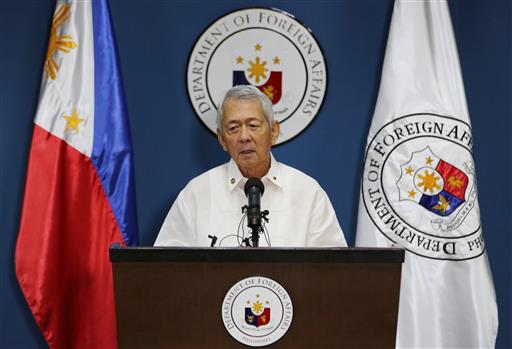 In a statement, the Department of Foreign Affairs (DFA) said Yasay will attend the Asean Foreign Ministers meeting and related meetings from July 23 to 26 where he is expected to raise the issue of the South China Sea disputes and the need for parties to abide by the arbitral tribunal ruling last July 12.

“The Secretary will share the Philippines’ perspectives on ASEAN Community building, the developments in the South China Sea and Korean Peninsula and pressing issues of regional concern including violent extremism, trafficking in persons, illegal drugs, and climate change, among others,”the DFA said in a statement on Friday.

Earlier, Yasay called on Asean to issue a statement supporting the international arbitral decision since four of its members—Philippines, Vietnam, Brunei and Malaysia—are claimants to waters of the South China Sea. Other Asean members include Singapore, Myanmar, Thailand, Laos, Indonesia and Cambodia.

Asean members have failed twice to issue a joint communiqué in a 2012 meeting in Phnom Penh and recently in Kuala Lumpur, due to conflictings stand on sea disputes.

But Yasay said he is confident that after the arbitration award, Asean will support the rule of law and peaceful settlement of disputes in the South China Sea.

“We already have the full support of the members of international community and we hope Asean will come up with a unified statement, I say this, in the context of the fact, that it will be important for Asean to have a unified statement,” said Yasay in an interview at the DFA on July 13, a day after the arbitration tribunal issued the award.

Issues on the South China Sea disputes, terrorism and denuclearization in the Korean Peninsula are expected to dominate the discussions.

Yasay will also attend the meetings of the South East Asia Nuclear Weapon Free Zone (SEANWFZ) Commission as well as the  Asean ministers dialogue with representatives of the Asean Intergovernmental Commission for Human Rights (AICHR) and Southwest Pacific Dialogue.

The DFA said Yasay will also have bilateral meetings with several counterparts on the sidelines of Asean meetings to discuss issues affecting bilateral relations and common concerns on global and regional issues. RAM/rga