Duterte: PH won’t give up sea rights but eyes bigger trade with China 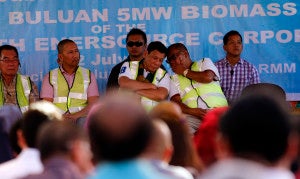 President Rodrigo Duterte listens to ex-mayor Jong Mangudadatu as he speaks Friday afternoon (July 22, 2016) during the inspection of the 5MW Biomass Power Plant of the Green Earth Energource Corporation in Buluan town in Maguindanao. (Photo by Jeoffrey Maitem/INQUIRER MINDANAO)

BULUAN, Maguindanao — President Duterte said on Friday he would want China to help in the country’s economic development.

The two countries are mulling approaches on how to repair relations after the United Nations-backed Permanent Court of Arbitration in The Hague ruled in favor of the Philippines’ territorial rights to control and develop areas within its exclusive economic zones in the West Philippine Sea, which overlaps with the South China Sea, claimed in whole by China.

“If we can have a settlement with them despite the arbitral judgment, I think that we will have many benefits,” Mr. Duterte said in his speech during his inspection of a biomass plant in Buluan Friday afternoon.

But the President stressed that the talk would have nothing to do with the Philippines giving up its rights over the disputed waters.

“Not that we are giving it up. That they will come here and I promise to establish economic zones… industries all over the country,” Mr. Duterte said.

“I really pray that we will be able to settle,” the President added.

During the election campaign, Duterte was once quoted as saying that the Philippines and China could choose, for the moment, to overlook sovereignty disputes over the West Philippine Sea and South China Sea to be able to significantly improve trade relations between the two countries.  Duterte, at that time, called on China to invest in building a national railway system for the Philippines.  SFM