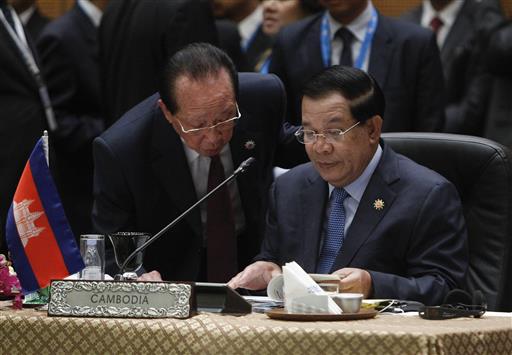 In this April 27, 2015, file photo, Cambodian Prime Minister Hun Sen, right, talks to Cambodia’s Foreign Minister Hor Namhong before the plenary session of the 26th ASEAN Summit in Kuala Lumpur, Malaysia. Five judges of a U.N. tribunal will deliver July 12, 2016, their landmark ruling on South China Sea disputes – and Beijing is already dismissing a potentially unfavorable outcome. Hun Sen, a China ally, spoke against the Permanent Court of Arbitration, further dividing the 10-member Association of Southeast Asian Nations. Speaking during the ruling party’s anniversary, Hun Sen said he was against “any declaration by ASEAN to support the decision of the Permanent Court of Arbitration in relation to the South China Sea disputes.” AP FILE PHOTO

VIENTIANE, Laos—Staunch China ally Cambodia is preventing Southeast Asia from reaching a consensus on the South China Sea after an international tribunal rejected Beijing’s territorial claims to the waters, a diplomat said Saturday.

The Association of Southeast Asian Nations (Asean) is meeting in Laos for the first time since the UN-backed tribunal ruled earlier this month that China did not have historic rights to vast swathes of the strategic sea.

The issue is expected to overshadow the summit, with several of the 10 member states also claiming territory in the contested waters.

China invests heavily across Asean but is accused of trying to divide the bloc by habitually offering aid, soft loans and diplomatic support to key allies Laos and Cambodia.

A Southeast Asian diplomat told Agence France-Presse (AFP) Saturday that only Cambodia is standing in the way of a joint statement on the waters.

“It’s very grave. Cambodia just opposes almost everything, even reference to respect for legal and diplomatic processes which already has been in previous statements,” the diplomat said.

Communist-ruled Laos also has close links with Beijing and has been accused of preventing a united front on the South China Sea issue.

But diplomats said as the chair of Asean this year Laos is trying to see a statement produced even if it is watered down.

“It does not need to take sides because even if only one country opposes, there is no consensus,” the diplomat told AFP.

Another regional diplomat said Friday that negotiations appeared to be at a deadlock.

“At this point positions are locked. Cambodia has taken a hard line. Laos is hiding behind its role Asean chairman and not saying anything but at the same time it is careful not to offend China,” the diplomat said.

Chinese pressure was blamed last month for a startling show of discord by bloc, with countries swiftly disowning a joint statement released by Malaysia after an Asean-China meeting.

That statement had expressed alarm over Beijing’s activities in the South China Sea.

The Philippines brought the international arbitration case against China, while fellow ASEAN members Vietnam, Malaysia and Brunei also have competing claims to parts of the sea.

In 2012 Asean foreign ministers failed to release a joint statement for the first time at the end of their annual gathering, with the Philippines blaming event host Cambodia for blocking criticism of China.