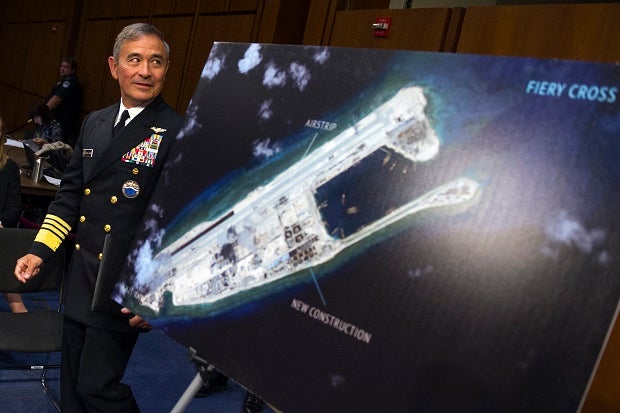 In this Sept. 17, 2015, photo, Adm. Harry B. Harris Jr. of US Navy Commander, US Pacific Command walks past a photograph showing an island that China is building on the Fiery Cross Reef in the South China Sea. AP

The international arbitral tribunal has concluded that China’s building of artificial islands in the Spratlys violates international law and has “caused severe harm” to the marine environment.

“The tribunal found that China’s recent large scale land reclamation and construction of artificial islands at seven features in the Spratly Islands has caused severe harm to the coral reef environment,” the arbitration court said in their verdict published on Tuesday.

“China has violated its obligation under Articles 192 and 194 of [Unclos] to preserve and protect the marine environment with respect to fragile ecosystems and the habitat of depleted, threatened, or endangered species,” it said.

The United Nations Convention on the Law of the Sea (Unclos), an international treaty that has been signed and ratified by both China and the Philippines, is universally regarded as the “constitution of the seas.”

The tribunal has also concluded that China’s “nine-dash line” claim over nearly the entire South China Sea has no basis under Unclos making it invalid.

The “nine-dash line” overlaps with the Philippines Unclos-mandated 200 nautical mile exclusive economic zone (EEZ). The Spratly Islands and Scarborough Shoal are both within the Philippines EEZ.

‘China has violated its obligation under Articles 192 and 194 of [Unclos] to preserve and protect the marine environment with respect to fragile ecosystems and the habitat of depleted, threatened, or endangered species’

“The tribunal noted that China has:

(a) built a large artificial island on Mischief Reef, a low-tide elevation located in the exclusive economic zone of the Philippines;

(b) caused permanent, irreparable harm to the coral reef ecosystem and

(c) permanently destroyed evidence of the natural condition of the features in question.”

It said that these actions by China had aggravated the tense situation in the West Philippine Sea despite the ongoing arbitration and dispute settlement process.

Several reefs and rocks in the Spratly Islands have been turned into artificial islands by China through massive land reclamation projects over the past two years. 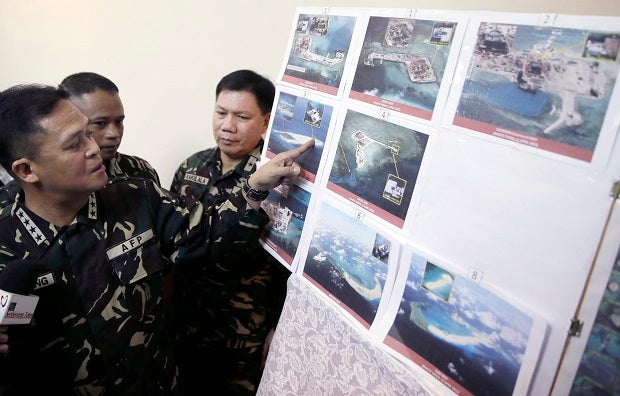 In this April 20, 2015, photo, Armed Forces of the Philippines Chief of Staff Gen. Gregorio Pio Catapang (left) points to reveal recent images of China’s reclamation activities being done at the disputed islands in the South China Sea during a news conference at Camp Aguinaldo. The dispute over the strategic waterways of the South China Sea has intensified, pitting a rising China against its smaller and militarily weaker neighbors who all lay claim to a string of isles, coral reefs and lagoons known as the Spratly and the Paracel Islands. AP

The tribunal said these artificial islands were not recognized under Unclos as “islands” and therefore were not entitled to an EEZ.

“The tribunal also found that Chinese fishermen have engaged in the harvesting of endangered sea turtles, coral, and giant clams on a substantial scale in the South China Sea, using methods that inflict severe damage on the coral reef environment,” the tribunal said.

“The tribunal found that Chinese authorities were aware of these activities and failed to fulfill their due diligence obligations under the convention to stop them,” it said.