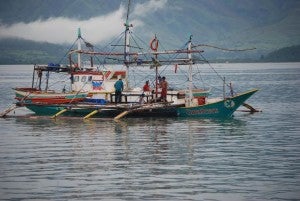 Fishermen from Subic, Zambales, prepare their boats for another fishing trip to Scarborough Shoal moments after the Permanent Court of Arbitration in The Hague favored the Philippines on its territorial dispute with China. (INQUIRER CENTRAL LUZON/Allan Macatuno)

SUBIC, Zambales — Fishermen geared up on Tuesday afternoon for a return trip to the disputed Scarborough Shoal, after the United Nations’ Permanent Court of Arbitration in The Hague armed them with a favorable ruling on the sea dispute.

“Tomorrow, we are going to sail back to the Panatag (Shoal). We are a bit afraid but the United Nations is on our side,” said Larry Alaras, 48, a fisherman, when news spread here, on Tuesday, about the favorable ruling received by the Philippines on its territorial dispute with China over the South China Sea.

The fishermen received the news while fixing their boats in Barangay Calapandayan here.

“We’re happy about it. We can now assert our rights to fish around the Scarborough Shoal,” said Alaras, also a boat skipper.

Alaras said he and his fellow fishermen here picked up reports about the decision hours before it was released.

“The question now is: Will the Chinese coast guards allow us to fish there?” he said.

Another fisherman, Tirso Atiga, 44, president of the Calapandayan Fishermen’s Multipurpose Cooperative, said, “We all know that the shoal and other islands or reefs in the West Philippine Sea are too far from China. It’s going to be unfair if the UN would give these to China.” 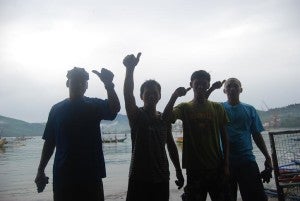 Fishermen from Subic, Zambales, celebrate as they receive the news that the Permanent Court of Arbitration in The Hague favored the Philippines on its territorial dispute with China. (INQUIRER CENTRAL LUZON/Allan Macatuno)

In Pangasinan province, Jowe Legaspi, a council member of the fishing village of Cato in Infanta town, said he was “not completely happy” with the UN court decision because China had repeatedly declared it would not honor it.

Legaspi was one of the 16 fishermen from Infanta who asked the UN last year to direct China to respect their rights to their traditional fishing grounds at the Panatag Shoal.

“We will only be completely happy if the Chinese will leave the Scarborough Shoal,” said Legaspi.

Another fisherman, Joseph Daroca, said it was all right for China to remain in the shoal as long as they would not chase away Filipino fishermen. He stopped fishing at the shoal last year because of the Chinese patrols.  SFM