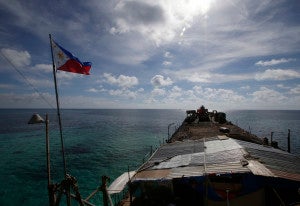 In this photo taken March 29, 2014, a Philippine flag flutters from the deck of the Philippine Navy ship LT 57 Sierra Madre off Second Thomas Shoal in the South China Sea. China has intensified the drumbeat of its opposition to a milestone ruling on Tuesday, July 12, 2016, by an international tribunal that would threaten its expansive claims in the South China Sea.(AP Photo/Bullit Marquez)

MANILA — Supreme Court Associate Justice Francis Jardeleza, who led the Philippine legal team to the United Nations arbitration case over the South China Sea dispute, said the ruling favoring the Philippines “is final and binding” and has given the Duterte administration an advantage to push for political and diplomatic negotiations with claimants in the sea disputes.

He said the arbitral tribunal ruled in favor of almost all of the submissions of the Philippines. These include the following:

*  China’s nine dash line is contrary to UNCLOS and has no basis in law;

*  Scarborough shoal and five (5) other reefs named in our submission are rocks that generate no entitlements to an exclusive economic zone or continental shelf;

*  Mischief Reef, Second Thomas Shoal and Reed Bank are submerged at high tide, form part of the exclusive economic zone and continental shelf of the Philippines, and are not overlapped by any possible entitlement of China;

*  Reed Bank is an entirely submerged reef formation that cannot give rise to maritime entitlements;

*  China violated its obligations under UNCLOS to protect and preserve the marine environment; and,

*  China has engaged in the construction of artificial islands, installations and structures at Mischief Reef without the authorization of the Philippines. 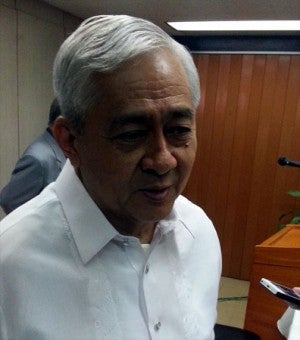 “ With this Award (of the arbitration court) issued by the distinguished panel of impartial legal experts, the rights and obligations of the parties under United Nations Convention on the Law of the Sea are now clarified,” said Jardeleza in a statement at the Supreme Court on Tuesday.

Jardeleza, who led the Philippine panel in the arbitration proceedings as then solicitor general said the award has given the government “a potent legal platform” to move forward to the political and diplomatic solutions of the sea disputes.

“In the final analysis, the disputes in the South China Sea will have to be resolved diplomatically, by agreement between various states,” said Jardeleza.

The award, according to Jardeleza, covers declaration of rights and entitlements “and can be used by the government to move forward politically and diplomatically.”  SFM