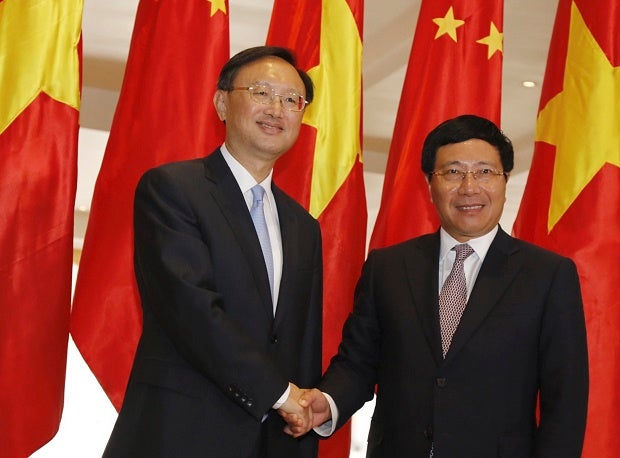 Chinese State Councilor Yang Jiechi, left, shakes hands with Vietnamese Foreign Minister Pham Binh Minh at the start of a bilateral conference in Hanoi, Vietnam Monday, June 27, 2016. Yang is on a two-day visit to Vietnam to try to promote cooperation amid growing tension over Chinese growing assertiveness in the South China Sea. AP

HANOI, Vietnam — Vietnam has protested against a Chinese military drill in the contested South China Sea and has demanded that China stop the actions it says are a threat to security and maritime safety.

China announced that it will carry out the week-long military drills on and around the Paracel islands starting Tuesday. They will finish on the eve of a ruling by an international tribunal in a case filed by the Philippines challenging China’s claims to most of the South China Sea.

“Vietnam strongly protests and demanded that China respect Vietnam’s sovereignty, behave responsibly, immediately stop and do not take actions that threaten security, maritime safety in the East Sea or escalate tension in this region,” Binh said, referring to the South China Sea.

China’s military exercise comes as the Permanent Court of Arbitration in The Hague is expected to issue a ruling on July 12 on a case brought by the Philippines in 2013 contesting China’s claims in the South China Sea.

Vietnam, China and Taiwan all claim the Paracel islands which are occupied by China, and those three along with the Philippines, Malaysia and Brunei claim all or parts of the Spratly islands, which are believed to rich in natural resources and occupy one of the world’s busiest sea lanes.

China’s massive land reclamation projects and increased militarization of the seven reefs and atolls in the Spratlys over the past two years have raised serious concerns in the region.