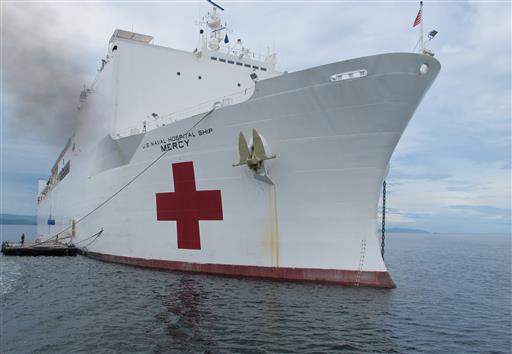 The US Navy hospital ship USNS Mercy is docked off the waters of Legazpi city in central Philippines for a medical mission Monday, July 4, 2016. Rear Admiral Brian Hurley, the commander of the US 7th Fleet Task force 73, in an interview with a select group of reporters on board the US Navy hospital ship USNS Mercy said the U.S. military is concerned about a series of attacks and abductions of tugboat crewmen by Abu Sayyaf extremists in Southeast Asian waters and is willing to lend a hand if needed as part of America’s aim to ensure the freedom and safety of navigation in the region. AP PHOTO

LEGAZPI, Philippines— The U.S. military is concerned about a series of attacks and abductions of tugboat crewmen by Abu Sayyaf extremists in Southeast Asian waters and is willing to lend a hand if needed as part of America’s aim to ensure the freedom and safety of navigation in the region, a U.S. Navy official said Monday.

Rear Adm. Brian Hurley said the U.S. Navy has worked with Southeast Asian governments to ensure freedom of navigation and the safety of people in the economically bustling region and would continue to do so.

Indonesia, Malaysia and the Philippines have agreed to take possible coordinated actions, including sea and air patrols, and establish a “transit corridor” as designated sea lanes for boats and ships in the seas along their borders to stop an alarming wave of attacks by the Abu Sayyaf and allied militants.

More than two dozen Indonesian and Malaysian crewmen have been kidnapped by ransom-seeking Abu Sayyaf militants and allied gunmen who have used powerful speedboats to stage four attacks on slow-moving tugboats in the Sulu Sea and outlying waters since April.

All the hostages from the first three attacks have been freed, reportedly in exchange for ransoms, but a fourth tugboat came under attack last month and seven Indonesian crewmen were kidnapped, officials said.

A Philippine military officer who has monitored the offshore attacks said the Abu Sayyaf may have been working with militants and contacts in Indonesia and Malaysia to carry out attacks on passing tugboats and commercial ships similar to the piracy assaults in Somalia a few years ago.

READ: AFP to use ‘shock and awe’ tactics vs Abu Sayyaf

The shift to piracy may have been prompted by stronger military actions that have made it more difficult for the militants to carry out kidnappings for ransom, a key source of funds for the Abu Sayyaf, the officer said.

“We are always concerned about safety at sea and the freedom of navigation through the waters,” Hurley said in an interview.

In the disputed South China Sea, the U.S. Navy deploys about 700 ships each year for patrols — an average of two ships per day — to ensure freedom of navigation, “and we’ll continue to do that all over the world,” Hurley said.

Hurley and other naval officials from Australia and New Zealand spoke on board the Navy hospital ship USNS Mercy off Legazpi city in the northeastern Philippine province of Albay while participating in an annual humanitarian mission called the Pacific Partnership, which also aims to improve disaster preparedness.

More than 600 military and civilian personnel from the U.S., Australia, New Zealand, Canada, the United Kingdom, Malaysia, Singapore and South Korea are involved in the civic mission that was conceived following a massive earthquake off Indonesia in December 2004 that triggered a tsunami which killed 230,000 people in a dozen countries.

Capt. Mike Spruce of the Royal Australian Navy Reserve said the annual disaster preparedness drills foster a feeling among governments “that when bad times come, that the rest of the family will come and help.”

While the U.S.-led event currently centers on humanitarian work, including minor surgeries, dental and other medical help, it may evolve later into a larger effort to also brace for aviation and ship disasters by harnessing naval and coast guard forces of different countries together, U.S. Commodore Tom Williams said.

“We want to do this in a calm environment,” Hurley said, “so when a crisis really does occur, that interoperability to respond in a crisis becomes second nature.”