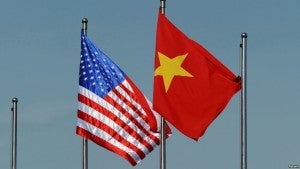 LOS ANGELES – On his recent trip to Vietnam, President Barack Obama lifted the decades-old ban on lethal weapons sales to the Communist-led nation and forged new economic ties, sending an unmistakable sign of American resolve to support ASEAN countries in the face of their growing maritime tensions with China.

“Both the US and Vietnam support freedom of navigation and peaceful regulation,” David B. Shear, who was US Ambassador to Vietnam from 2011 to 2014, declared at an AsiaConnect press briefing June 24.

Shear, who now works under the Secretary of Defense for Policy and the US Dept. of Defense, hailed the US’ new strategic partnership with Vietnam and its ASEAN neighbors, including the Philippines.

A newly implemented program, the Southeast Asia Maritime Security Initiative (MSI) involves both the Philippines and Vietnam and allows the nations—including the U.S., Indonesia, Taiwan, Brunei, Thailand and Singapore—to work together to address maritime challenges and strengthen security in the South China Sea. The total cost of the five-year program is about $425 million.

“We look forward to implementing the defense security with between countries. Lifting the naval arms ban was based on the desire to move forward with normalization, reflects improving changes and common interests… and ensures that [Vietnam] has access to the security it needs to protect itself,” Shear explained.

Also speaking at the press briefing, scholar Wendy Cutler stated, “This year marks the 20th anniversary of diplomatic relations between the US and Vietnam. Our security partnership is still relevantly new, but is a step forward in building a deeper, normalized relationship between [the nations].” Cutler is vice president and managing director of the Asia Society Policy Institute, a DC-based think tank that focuses on US-Asia policies and relations.

In April U.S. Defense Secretary Ash Carter visited the aircraft carrier USS John C. Stennis, which operates west of Luzon in the South China Sea, during a visit to the Philippines.

Carter promised that the US “intends to continue to play a role out here that it has for seven decades—keeping peace and stability, which has allowed the Asian miracle of prosperity and political and economic development.”